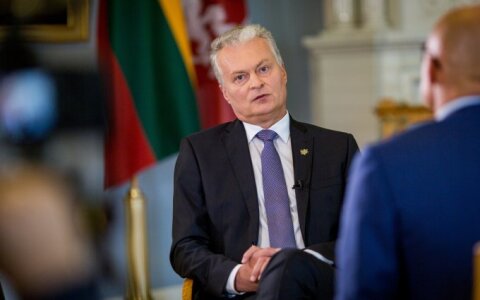 "Any tax changes can never be adopted like cutting butter, and they always face resistance from certain public groups," Nauseda told journalists after meeting with members of the Board of the Seimas on Friday.

Earlier this week, the president proposed for tax changes to be adopted during the upcoming parliamentary fall session to increase social security spending by additional 100 million euros next year and to spend the majority of it to step up increases in old-age pensions and payments to the disabled.

Nauseda underlined that one cannot "make social decisions in a vacuum or empty base" as every decision needs a source of revenue to avoid a budget deficit.

"What we propose today, first of all, involves non-radical changes to the tax environment that are fairly predictable are really implementable, unless somebody undermined it intentionally," he said.

According to the Lithuanian president, changes to the diesel fuel tax exemption "have caused major controversies" in the past but the president says he's not proposing cancelling the exemption completely but making its size "more acceptable."

Nauseda also proposed increasing the non-taxable income only around 10 percent, or 30 euros, next year, which sparked a critical reaction from the Social Democratic Labor Party of Lithuania

"Of course, it's less than the original proposal which currently still in place. But as far as I know, the government itself also plans to slow the non-taxable income increase and that will be done soon," Nauseda said.

His office plans to put specific bills before the Seimas later, and Nauseda says he's ready to prove the need for every decision.

"And if one or the other bill is not implemented, the public, with no doubt, needs to know who failed to adopt it, why they did so and what the real reasons were. That will be very useful information before the next Seimas election," the president said.