Record arrivals of foreigners to Lithuania: highest in 5 years 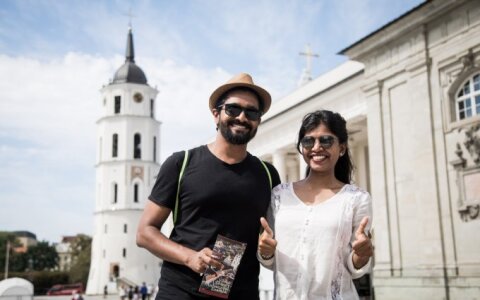 Continuing growth in inbound tourism from Ukraine, United Kingdom and Finland. As in Q1 2019, growth in incoming tourists from Ukraine is continuing. This country is among the six countries whose inhabitants account for the largest groups of tourists in Lithuania. During the first six months of this year, 51,400 Ukrainian tourists visited Lithuania and spent a total of 107,400 nights. They are the leaders according to the growth in the length of stay (9.09% growth) among the top ten largest groups of tourists visiting Lithuania by country. Ukrainians spend over two nights in Lithuania. A two-digit growth in the number of incoming tourists from the United Kingdom and Finland has been recorded for the third consecutive year. A total of 36,300 tourists from the United Kingdom and 20,900 Finnish tourists (at number ten) visited Lithuania in the first six months of the year.

Domestic tourism continues to break records. In H1 2019, 919,000 inhabitants of Lithuania had travelled inside the country with at least one overnight at a tourist accommodation provider. The figure is 13.23% higher YoY. Domestic tourists account for more than half of the country's tourism market – 55.2%. This ratio compensates for seasonal fluctuations characteristic to foreign tourist flows. By way of comparison, in Latvia, domestic tourism accounts for only about 30% and in Estonia – about 40% of the tourism market.

Record arrivals of foreigners to Lithuania: highest in 5 years