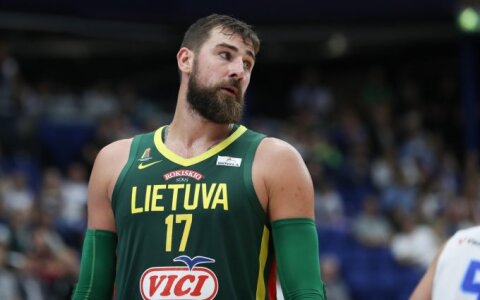 This was the one we needed to win. You can’t go into a World Cup tournament not having defeated your arch-rival in the warm-up match. That’s precisely what Lithuania did however, knocking the Russians down a peg by winning decisively, although it was not easy at times. At the end of the day, the Russians didn’t have any players named Domantas Sabonis and Marius Grigonis. When the smoke cleared, the final score was 88:72 (21:12, 22:23, 27:21, 18:16), with the green machine on top!

The game started off with Domas as the lone NBA player for Lithuania, JV has been given the night off by the coach. Going into battle with him in the first string unit was Mantas Kalnietis, Marius Grigonis, Mindaugas Kuzminskas, and Edgaras Ulanovas. Coach Dainius Adomaitis, a man who has never been afraid of experimenting with a multitude of different lineups, decided it was time to try out this unique squad to see what would happen.

In the early going it seemed like this new experiment by the coach was destined to fail. It was a low scoring affair through the first several minutes of the game and no one on either team seemed able to get in rhythm. Then the son of the Lithuanian legend decided tonight would be his night to go berserk. An emphatic dunk off of a beautiful feed from Mindaugas Kuzminskas was the first of many great plays by the young star and it let the Russians know that his father wasn’t the ONLY Lithuanian who was capable of hurting them! Mindaugas and Marius also got going themselves shortly after that, scoring from both inside and out. By the end of the quarter, Lithuania was on top 21:12.

With the arrival of the second unit late in the first and continuing into the second quarter however, things started falling apart. Lukas Lekavičius just didn’t look comfortable and there were multiple turnovers, some by him, but plenty of others committed by his second unit teammates too. All in all, the Lithuanians had a very sloppy game tonight, committing a total of 22 turnovers. Jonas Mačiulis, Paulius Jankunas we’re turnover prone and so was Mantas Kalnietis when the coach brought him back in. They all fell victim to Russia’s very aggressive defense. Dainius put Domas back in the game and seemingly just like that, the situation stabilized. He was in double digits on points by halftime. His running mate tonight, Marius Grigonis, also helped shoulder the scoring burden when he came back from his rest, by halftime the Lithuanians had weathered a Russian run which had brought them within one possession of the Green Machine . The good guys went into the locker room up 8 points, 43:35.

The second half, very similar to the first

For the first time since the friendly matches began, coach Dainius decided to keep the same starters in the second half that he used in the first half. This decision paid off because Lithuania, more precisely Domas and Marius, controlled the third quarter most of the way through. With 3:03 left to play in the quarter, they were up by 21 points 65:44. It was almost magical. Domas was being aggressive whenever he got the ball inside, scoring at will, and Marius was being just as aggressive whenever he got the ball beyond the arc, draining every three pointer he attempted. He even had an amazing four point play that the announcer said was reminiscent of the Golden St. Warriors and Steph Curry. Then almost like clockwork, once the starters came out of the game and the bench unit came back in, things started to fall apart.

The strange thing about this game was the fact that Dainius Adomaitis only decided to put Martynas Gebenas, the back-up center, and Rokas Giedraitis, the back-up small forward in during the second half. Neither of these two players had played a single minute in the first half and it definitely showed. By coming into the game ice-cold they were out of rhythm. The turnovers at this point became almost a comedy of errors, with Lithuania playing very sloppy basketball. By the end of the period, the Russians had tightened things up and it was 70:56 going into the final stanza.

In the fourth the second unit’s woes continued and worsened, things got so bad that the coach had to re-insert his NBA stud after a very short rest. Domas came back into the game with nearly nine minutes left to go. The bleeding would not stop right away however, and it looked like the Russians were going to pull off a dramatic turnaround, getting within eight points of the good guys. Then Jonas Mačiulis ended up calmly draining a clutch three pointer from the far corner with 6 minutes left to right the ship. It is not surprising that the desperately needed bucket came from an elite veteran like him. From that point on Lithuania was in control, with enough of a cushion on points to take care of business and end up with a nice double-digit win 88:72.

Three takeaways from the victory

1) Mantas Kalnietis did not score at all until 4:21 left in the entire game, when Domas was double-teamed and found the point guard for an easy lay-up. This is not acceptable. I don’t know if his problem has been mental or if he’s grappling with injuries but Lithuania will need to have their leader be more aggressive in the tournament so they can get some needed points when their big men are struggling. He’s perfectly capable of doing it, we all remember in 2015 when he was Lithuania’s leading scorer on the silver-medal winning EuroBasket team. In that tourney, he averaged 17 points a game and was a tournament leader in scoring. It’s a luxury to have two NBA big men, but opponent teams will pack the paint in the tournament so Lithuania will need a reliable scoring option like Kalnietis has been in the past.

2) Marius Grigonis might just be the answer Lithuania has been looking for as an elite guard. This is yet another game when he has played fantastic! He is a reliable scorer from three point land and can dribble penetrate well enough to keep the defense from guarding him too closely out there. He is now officially the starter, taking Renaldas Seibutis traditional spot. In my opinion this is going to work our nicely because Seibutis will help anchor the bench unit, providing a secondary ball handler to pair with Lekavičius, who at times can be stymied by bigger defenders. I seriously doubt a player who has been marinated in the Lithuanian system of “team first” basketball like Seibutis will have an ego problem about his demotion. I predict he will take to his new role very well and will be the utmost professional about it.

3) Eimantas Bendžius, Edgaras Ulanovas and Žygmantas Janavičius all should be cut for the final roster. Although Ulanovas had a better game tonight scoring five points, these points happened in garbage time, once the game had already been decided. For most of the game he was his usual non-impactful self, not scoring and committing fouls or turnovers. He’s not a terrible player, he is just very redundant for a team with massive forward depth already. Lithuania will be just fine without him. In his place, I feel as though Arnas Butkevičius should get the nod to be part of the National Team for the first time in his career . He is an effort player, and I believe there will be multiple chances throughout the tournament where he could just be the “x-factor”, or the unexpected secret to the team’s success. His memorable moment tonight was at the very end of the first half when he attacked the rim with just a couple of seconds to go. He finished with a bucket and a (made) free-throw so Lithuania could go into the locker room up by 8 points. Dainius will have to make this decision between the two , Arnas or Edgaras. It doesn’t appear that Eimantas Bendžius or Janavičius are potential dark horse candidates. He’s definitely got a tough decision ahead of him for sure because knowing Lithuanian basketball fans, he will probably get crucified either way.

At the end of the day, no matter how many times you’ve watched the great Lithuanian documentary/drama ‘The Other Dream Team’, it still feels good to get a win against Russia! I know people shouldn’t mix politics and sport, but sometimes it’s difficult to rise above and separate the two. It’s just something if you’re a Lithuanian you shouldn’t do...drop a game, no matter how meaningless, to your arch-rival Russia!