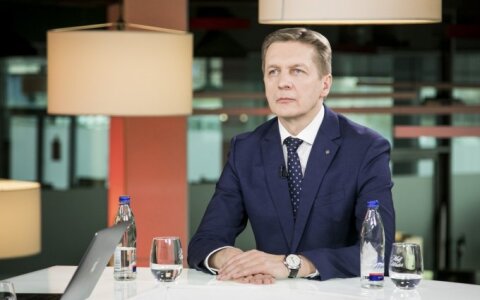 Masiulis says he's aware of the circulating talks that some of the managers of state enterprises he's appointed might be replaced, including those of the country's state-run railway company Lietuvos Gelezinkeliai (Lithuanian Railways, LG).

"I hear those talks that executives might be replaced, but one needs arguments to replace an executive. And if there are objective argument is one thing. But the wish to dispose of is another thing," Masiulis told a press conference on Wednesday.

Commenting on Vaitkus' chances of being reinstated as the port's CEO, Masiulis said it's hardly possible.

Related articles
Karbauskis: there's no other minister with so many problems
Watchdog: ex-Klaipeda port breached law and ethics

The public broadcaster LRT reported in January that people linked to one another through Klaipeda businesses had donated 44,000 euros for the Lithuanian Farmers and Greens Union's election campaign in the port city.

They reportedly included Igor Udovickij, a Klaipeda businessman dubbed "the king of Belarusian fertilizers", and his wife. Other LFGU candidates who won seats on the Klaipeda council include Vidmantas Dambrauskas, the CEO of Biriu Kroviniu Terminalas (Bulk Cargo Terminal), and Arunas Tuma, the owner of Kamineros Grupe. Both men made the maximum allowed donations of almost 8,800 euros each to the LFGU election campaign.

In March, Vaitkus was elected to Klaipeda's municipal council on the LFGU list but lost the mayoral runoff.