Analysis: team Lithuania plays much better without the short shorts! 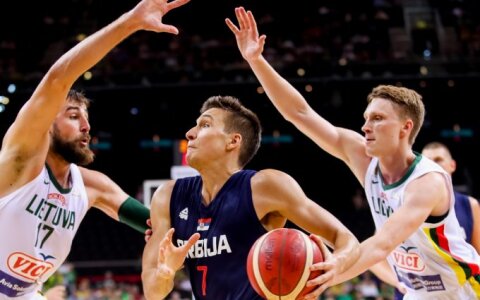 After yesterday's unsuccessful match for Lithuanian team in Kaunas Neal Maloney shares his insights about the game.

The first half of this game was Lithuania playing too passively, too conservatively, almost as though the retro outfits that they were forced to wear by whatever Lithuanian marketing group had gone to their heads. It was as though they were actually playing like it was the 1930’s, with not nearly enough athletic attacking and quick-trigger three pointers that define the modern game. It should just go without saying, you can’t be confident while wearing the same shorts as the halftime dancers!

Despite the wardrobe malfunction, in the first quarter Lithuania did jump out to an early lead, but this time their opponents were answering back every time on the other end. They were staying with the home team, unlike game one in Belgrade when Lithuania just pummeled the Serbs in the early going.

This time JV and Domas both started out the game together getting buckets inside and scoring. Mačiulis, Seibutis and Kalnietis were the rest of the starters who all knew how to get the ball to their big men down low where they can do damage. Their problem however was lack of defense,giving up baskets to their opponents on the other end by not closing out quickly on shooters. The green machine did enjoy a small lead after one 22-20.

Once again however, NBA super-stud from the Denver Nuggets, Nikola Jokic took control of the game in the second quarter. Those “shorty shorts” really began messing with Lithuania’s head and the team was over-thinking every single decision, rather than just aggressively attacking. There were fouls and TO’s galore yet again, led by Edgaras Ulanovas, who had probably the worst game I’ve ever seen for someone who was basically given starter minutes by the coach. He wasn’t the only Lithuanian for sure who committed dumb mistakes, JV was also guilty as well, but he seemed perfectly capable of offsetting his errors with baskets on offense, unlike the Žalgiris player Ulanovas who was scoreless. By the end of the half, it was getting ugly. The score was 45:37 Serbia going into the locker room.

Second half Lithuania comes roaring back

Out of the locker room to start the second half team Lithuania came out with one very noticeable difference. They were wearing their normal uniforms as opposed to those horrible retro uniforms which they had ditched. God, I would have loved to be a fly on the wall in the locker room witnessing the revolt that took place over how dumb the guys probably felt they looked. On the one hand, it’s definitely great to honor Lithuania’s important tradition of great basketball. On the other hand, the team wants to win, and feeling like a total dork doesn’t really help build confidence towards that goal. In other words, who in Lithuania thinks it is a good idea to subject our National Team to this loony stuff!

Back wearing their comfortable home uniforms, Lithuania went to work right away and it was a very noticeable difference. As usual for coach Adomaitis, there was a change in the starting 5 going into the new half and this time he chose to replace Jonas Mačiulis, who had played fairly well as a starter in the first, hitting a clutch three-pointer when Lithuania needed a bucket, with the young player from Lietuvos Rytas, Rokas Giedraitis. Within a few minutes, Lithuania erased the deficit from halftime and actually took the lead themselves. The guys came out aggressive and attacked constantly, not hesitating on shots and driving hard to the rim when any kind of lane opened up. Perhaps the most important difference was the defensive effort, Lithuania became sort of a fast break team, getting some steals and scoring quickly in transition during the 3rd period. This is a bit unusual for the usual Lithuanian style of grinding the other team to death in the paint slowly and methodically. The crowd in Žalgirio Arena was going wild during all this, it was definitely fun to watch. Lithuania enjoyed a 71-69 lead going into the final stanza.

Their great play continued well into the fourth period as Lithuania extended their lead to 7, their largest of the game. After that euphoria wore off, it seemed as though Lithuania decided to play a re-run of the exact same show from Belgrade. Again they were up fairly late in the game, then questionable personnel changes late in the game mucked things up good and proper.

First coach Adomaitis tried a unit of Domas with Mačiulis , Kalnietis, Ulanovas and Grigonis. When he felt that didn’t work anymore and Serbia re-took the lead, the coach then swapped out JV for Domas but left the rest of that unit on the floor together even though Domas wasn’t the problem at all.

Without trying to push all the blame on one person, Edgaras Ulanovas was completely a negative presence on the floor and there was literally no reason he should have played out the game in crunch time, other than the fact that he is a fan favorite of the Kaunas Žalgiris and the game was being played on their home floor. He committed foul after foul, turnover after turnover and failed to stop his man on defense multiple times. Yet Dainius felt compelled to finish the game with him, while his elite studs like Mindaugas Kuzminskas and Domas Sabonis languished on the bench. In the very final minute, the coach took it a step further and ended up even taking out JV in favor Paulius Jankunas. In all fairness, Jankunas was an impactful player during Lithuania’s second half run, but not so good however when he was forced to guard the elite Nikola Jokic at the center position. Once you put a 6’9” European club player up against a 7’0” NBA MVP candidate, what could possibly go wrong? Nikola Jokic predictably abused the Zalgiris power forward and Serbia ended the game with a 95-91 margin of victory.

1) Dainius Adomaitis needs to put confidence in the right players during crunch time. It was unacceptable that a player like Edgaras Ulanovas, who had a terrible game and quite frankly should be on the short list of candidates to go home, played as much as he did, especially in crunch time! Lithuania needs three-point shooting badly to space the floor and his back-to-the-basket, midrange game is just too outdated. Lithuania has elite forwards galore, and a mediocre one like him is just too redundant and in tonight’s case took away minutes from better players!

A nice floor spacer like Adas Juskevičius would have been a lot better for the team roster than having three guys on the floor at the same time (Ulanovas,JV, Domas) that slow the game down by trying to post-up one on one. It’s fine to have one elite post player like JV, maybe even two during the times that he plays together with Domas, but THREE players that have this style when you add Edgaras to the mix? It quite frankly just makes the other team want to switch to a zone defense and clog the paint because they don’t have to worry about anyone shooting threes. This is a personnel mistake that could haunt him in China. Guards are at a premium for team Lithuania!

2) Kalnietis played much better tonight and it was because much of the time he reverted to his natural shooting guard style and attacked the basket that made him more effective. The coach still has yet to try out the combination of Kalnietis at the shooting guard alongside Lukas Lekavicius at the point guard spot. In his mind, he is probably feeling his lack of guard depth which to him means one must be resting while the other one is playing. This is because with the exception of possibly Renaldas Seibutis, there is precisely zero other players on the team who are good enough ball handlers to run the offense at the point guard spot! Saying goodbye to Adas Juskevicius cannot be emphasized enough for its short-sightedness as a coaching decision.

3) Despite the loss tonight, I wouldn’t worry too much about the group play aspect of the tournament in China. Lithuania has showed by facing a serious heavyweight contender like Serbia and going 15 rounds with them (both times) that they themselves are legitimate medal contenders. Serbia this year however, might be on another level. They are an extremely balanced team that has a great mix of NBA quality big men and excellent shooters, I would actually not be surprised if they upset an under-strength team USA this year in and manage to steal the gold the way Argentina did in the Olympics in 2004. The fact that Lithuania took their best punches and was still standing after two very close games shows that Lithuania is up their in medal consideration too. As I stated before, Lithuania’s group H appeared to be stronger earlier based on the fact that Canada and Australia have a ton of NBA talent. The problem for those teams however, is not many of those NBA players decided to join their national team rosters this year. Lithuania of course has all their best players available, to not be part of the national team in a country that prides itself on treating basketball like a second religion, it’s almost blasphemy!

I have no doubt in my mind after what I witnessed these past two games that Lithuania will make it out of group H and head to that promised land they know so well called the quarterfinal. However, unless Dainius can get the right personnel in the games at the right times, it might just be difficult for them to get to the medal round this year!

Analysis: team Lithuania plays much better without the short shorts!