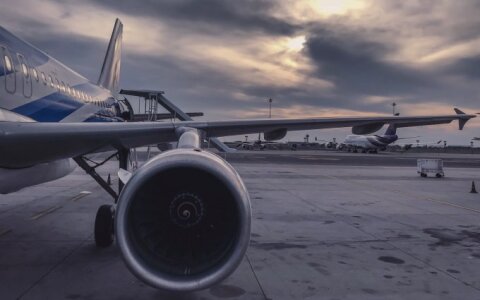 Kaunas Airport marks the aviation summer with ever newer record of passenger traffic. In July, more than 114 thousand passengers have travelled across Kaunas Airport, counts Lithuanian Airports. This is more by 12 thousand than in May, when the record – a six-digit number of passengers – was reached.

“In July, we served 114,284 passengers in total. The number of flights has grown stably too – in July we handled 934 flights, and we carried 276 t of cargo on cargo shipping flights. These are absolutely the best results of this airport, excluding the period when due to reconstruction of the runway in the capital, aircraft were directed to Kaunas”, confirmed the Director of Kaunas Airport Mr. Karolis Matulaitis.

According to him, the fact that Kaunas Airport became a “full-range” aviation service provider especially contributed to the record-breaking increase in the number of passengers as not only low-cost flights are operated, but also charter flights have been commenced since the beginning of the year. In the mid-summer, entirely new destinations to Germany have been launched. Still another record – 1000 flights a month – is rapidly approaching.

“In July, two new destinations were offered to travellers - the cities of Cologne and Nurnberg. We have awaited a more plentiful number of passengers and prepared for that. In these directions, flights will be conducted also during the winter season. We constantly develop aviation services, cooperate with airlines, thus we plan to retain a stable growth in the number of passengers”, told Mr. Matulaitis.

The record-breaking result of July is partially due to the international military training actively conducted at that time to which their participants arrived through Kaunas Airport.

During the period of 2014–2018, the number of flights has grown at Kaunas Airport by even 112 percent, and of passengers – by 41 percent. The head of Kaunas Airport notes that in order to ensure smooth operation of the airport against an increased number of passengers, all processes are planned especially carefully. Much attention is paid to the drawing up of a detailed day plan and assurance of maximum passenger comfort. If necessary, also additional staff members are involved into the passenger service processes.

Having regard to increasing passenger traffic, a project for developing the passenger terminal is also prepared at Kaunas Airport – plans have been made to meet passengers in a more spacious airport in 2022. It is aimed at serving about 2 million passengers in a quality manner through the second air gates of the country.