Advisor: Tamasuniene proposed for minister in response to Nauseda's recommendation 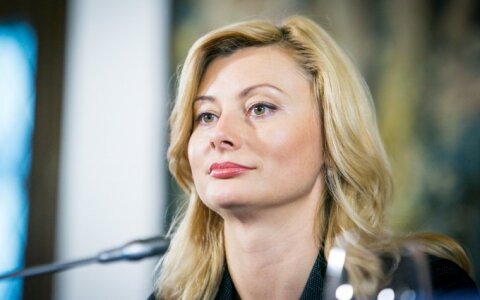 The Electoral Action of Poles in Lithuania – Christian Families Alliance is proposing Rita Tamasuniene for interior minister taking into account President Gitanas Nauseda's recommendation for the new government to have female ministers, a presidential advisor says.

Povilas Maciulis, the presidential adviser on internal policy issues, says the EAPL-CFA itself could provide arguments.

"But that could also be viewed as taking into account the president's recommendation for the government to have women as well," Maciulis said on Tuesday after Nauseda met with Tamasuniene.

He also confirmed that Prime Minister Saulius Skvernelis plans to submit the whole list of candidates for ministers on Wednesday.

"Yes indeed. I don’t know what should change for that not to happen. But it has already been discussed and there are expectations for the whole government composition to be submitted tomorrow morning," Maciulis said.

The Lithuanian president plans to meet with Narkevic on Wednesday.

The EAPL-CFA received the two Cabinet portfolios in line with the coalition agreement signed with the Lithuanian Farmers and Greens Union, the Social Democratic Labor Party and the Order and Justice party in early July.

Under the new coalition agreement, the ruling parties have also agreed to replace Agriculture Minister Giedrius Surplys, and the SDLP has already proposed MP Andrius Palionis for the position.

Advisor: Tamasuniene proposed for minister in response to Nauseda's recommendation