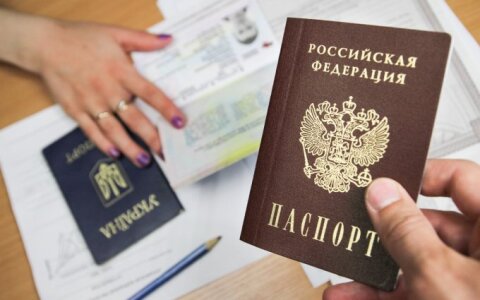 Lithuanian diplomats are working toward a coordinated EU policy of not recognizing Russian passports issued to residents of Eastern Ukraine, the Foreign Ministry said, adding that the country will take unilateral action if the initiative fails.

"We are currently actively working toward a coordinated EU-level response to Russia's ongoing violations of Ukrainian sovereignty and territorial integrity, including illegally issued documents of the Russian Federation to Ukrainian residents in the Ukrainian regions of Donetsk and Luhansk, temporarily occupied by Russia," the ministry said in a comment to BNS.

Estonia has decided not to recognize Russian passports issued to residents of the conflict-torn regions after April 24, when President Vladimir Putin signed a decree simplifying the procedure for obtaining Russian citizenship for the Donbass residents.

The Lithuanian Foreign Ministry says that it has repeatedly stated, in various international formats, its inclination not to recognize these passports.

"Discussions are currently underway in Brussels where EU institutions and member states are looking for ways to technically implement a coordinated and united EU policy of non-recognition of these passports," the ministry said in the comment.

"If such a common agreement is not reached, unilateral measures will be introduced," it added.