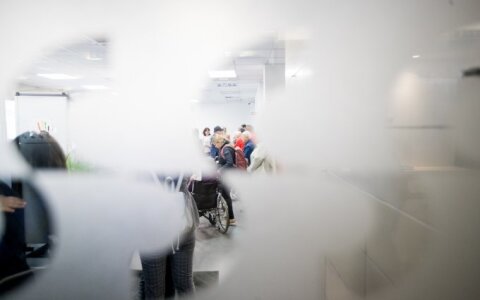 In the two years since he came to Lithuania, Russian political activist Yuri Gorsky has been twice refused political asylum in the country.

He said his client would appeal the ruling.

Neither the Migration Department nor the court would comment on the contents of the case, citing the confidentiality of intelligence information and personal data protection requirements as the reason.

Gorsky says on Facebook it is regrettable that the court failed to take into account letters in his support from several non-governmental organizations.

The Russian, who calls himself a nationalist, also says he has not been told what threat he poses to Lithuania's national security.

The first time the Russian citizen's request for asylum was denied was in May 2018. However, the Lithuanian Supreme Administrative Court later ordered the Migration Department to reconsider Gorsky's application.

In its initial decision, the Migration Department cited information from the State Security Department saying that Gorsky maintained contacts with Russian intelligence bodies and that there were indications that he could be carrying out Russia's policy in Lithuania.

Meanwhile, the Freedom House described the Russian as a Kremlin-controlled provocateur who only imitates opposition activities.

Gorsky has dismissed these allegations as untrue.

The man came to Lithuania in July 2017, saying he had fled from house arrest in Russia.

Russian law-enforcement officials suspect that Gorsky made public calls for extremist activity at a nationalist rally. He is on Russia's list of extremists.

The activist says Russia's authorities are persecuting him for his civic activities.