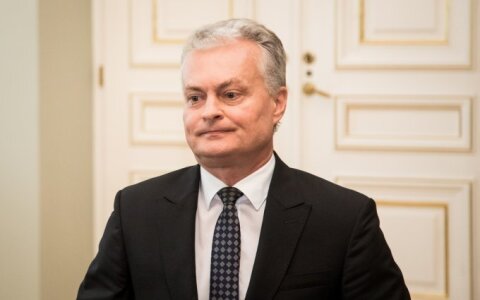 There cannot be several different policies on sensitive historic issues in Lithuania, and the assessment of historic figures should be depoliticized, Lithuanian President Gitanas Nauseda says.

Attending a convention of former deportees and political prisoners in Ariogala, central Lithuania, on Saturday, the president said he has belief in the ability to "resolve all divisions" as the recent decisions to remove the controversial memorial plaque to Jonas Noreika, a Lithuanian military officer known as Generolas Vetra (General Storm), in central Vilnius, and also rename a Vilnius street named after Kazys Skirpa slit the Lithuanian public.

Nauseda called for "a moratorium on erasing historic memory" and during that time "find a common solution, a common policy to avoid a situation when one mayor in some place in Lithuania has one attitude to Vetra, Skirpa and other memorable people of ours, and a mayor in some other place thinks otherwise and starts installing plaques; to avoid several policies in Lithuania on such really painful and sensitive issues of our history."

Related articles
Controversial memorial plaque to Noreika removed in Vilnius
Linkevicius: calls for decisions on memorial signs to be based on experts' opinion  (1)

Asked who should form a common policy on these issues, the president said that "both the commission, which is already established, and also the Culture Forum we plan to establish under the Presidential Office shortly, could look into this issue and set certain principles."

"I realize it will not be easy to immediately find the common denominator but at least we will depoliticize this process which is now in the hands of politicians, and that's the worst possible scenario," Nauseda said.

During the convention in Ariogala, former political prisoners and deportees adopted a resolution demanding "halting the society's polarization" over the memorial in Lukiskes Square and memorial signs.

The controversial memorial plaque to Noreika was removed on Jul 27, and Vilnius Mayor Remigijus Simasius said it was done after taking into account the fact that Noreika approved the Nazi administration's decisions to establish a Jewish ghetto and seize their property.

And on Jul 24, Vilnius City Council decided to rename a small street in central Vilnius named after Kazys Skirpa, a controversial 20th-century Lithuanian diplomat and military officer, due to his declared anti-Semitic views.

Both decisions received support and backlash.

Critics have for some time demanded the removal of the plaque honoring Noreika who, as head of Siauliai County during the Nazi occupation period, signed documents on the establishment of a Jewish ghetto and on arrangements regarding Jewish property.

Noreika's defenders, however, highlighted his involvement in the anti-Soviet resistance in Lithuania and also point to the fact that he was later involved in anti-Nazi activities during the war.

The Genocide and Resistance Research Center of Lithuania's conclusions on Skirpa states that he made a significant contribution to the anti-Soviet resistance. But it also added that his activity in 1940-1941 had "signs of anti-Semitism."