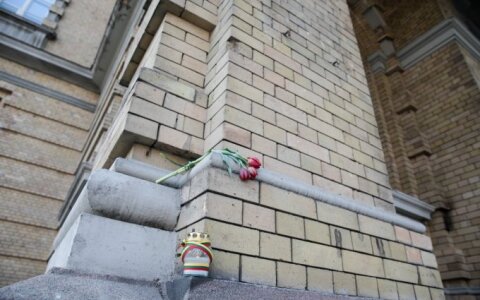 Prosecutors have received four complaints over the removal of the memorial plaque to Jonas Noreika, a pre-war Lithuanian military officer and an anti-Soviet resistance fighter accused of collaboration with the Nazis, in central Vilnius, 15min.lt reported on Friday.

The Prosecutor General's Office told the news site that the complaints were being examined, but no decisions had been made yet.

The plaque to Noreika, known as Generolas Vetra (General Storm), was taken down from the facade of the Wroblewski Library of the Lithuanian Academy of Sciences in the early hours of last Saturday, provoking both outrage and support.

Vilnius Mayor Remigijus Simasius has said the plaque was removed in view of the fact that Noreika, as head of Siauliai County during the Nazi occupation period, put his signature on the Nazi administration's decisions to set up a Jewish ghetto and confiscate their property.