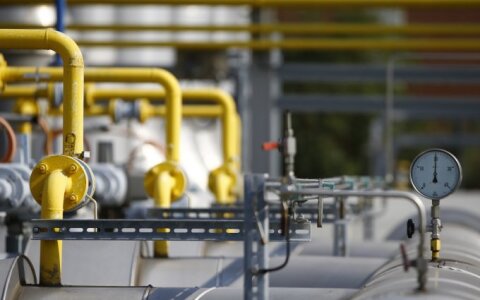 The Lithuanian government is expected to endorse this week the security plans of the natural gas transmission system operator Amber Grid, which is carrying out the Gas Interconnector Poland-Lithuania (GIPL) project in Lithuania's territory.

The Cabinet's approval is necessary before a special governmental commission vetting deals by strategic companies can give its final opinion on the winning bidder and Amber Grid can sign the contract with the contractor.

Energy Minister Zygimantas Vaiciunas has confirmed to BNS that the Cabinet plans to approve Amber Grid's security plan this week. The document will be discussed in a closed meeting and will not be made public.

According to the minister, a list of the three top-ranked bidders has already been submitted to the commission. The winning bidder will be selected from among the three after it is ascertained that it poses no threat to national security.

The names of all bidders have been kept confidential. According to information available to BNS, Amber Grid received bids from four consortia of Lithuanian companies and their foreign partners, and one company from Spain and Greece each.

Kaunas-based KRS says it submitted the lowest price offer, at around 75 million euros not including VAT, but was rejected as not meeting national security criteria because it bid jointly with Belarus' pipeline construction company Beltruboprovodstroy.

"We received a negative opinion (from the State Security Department) and didn't go through," KRS CEO Darius Vilimas told BNS. "We received the documents; the commission decided there's a threat to the country".

In his words, the reason why KRS chose the Belarusian company as its potential partner is that it is one of the strongest gas pipeline builders in the former Soviet Union.

Vaiciunas said the winning bidder is likely to be selected in August, with construction work expected to be launched in early October.

Amber Grid has already named Poland's Izostal as the winner of a contract, worth 31.9 million euros including VAT, to supply steel pipes for the gas pipeline. The contract will be signed if the Lithuanian company's shareholders give the green light on July 23.

The 165-kilometer gas transmission pipeline will be built from the Jauniunai compressor station in the Sirvintos district to the Lithuanian-Polish border in the Lazdijai district.

The construction will start once both the pipe and contractor contracts have been signed. The interconnection is scheduled to come online by late 2021.

The new capacities will allow transporting up 27 terawatt-hours (TWh) of natural gas to the Baltic countries and up to 22 TWh to Poland annually, making the Baltic gas market a part of the EU common gas market.