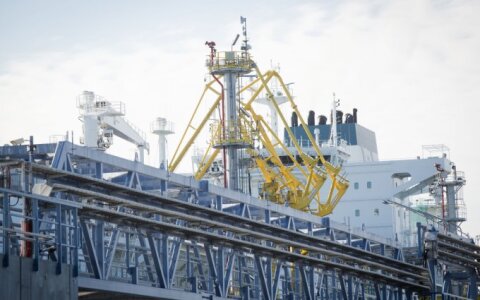 Lithuanian Prime Minister Saulius Skvernelis expects that the Energy Ministry's row with Achemos Grupe over plans to transfer Klaipedos Nafta's LNG business to a separate company will not prevent the government from taking decisions that are necessary for cutting the LNG terminal-related burden for consumers starting in December.

"This (reduction of the LNG terminal component of the gas tariff) is envisaged in the government program and we must act to lower the burden," he told reporters after the Cabinet's meeting on Wednesday.

Skvernelis said he believed that the burden could be reduced starting on December 1. "I believe we will," he said.

On Tuesday, Achemos Grupe, the largest minority shareholder of Klaipedos Nafta, complained to the Lithuanian president, the prime minister and the European Commission over the planned reorganization of the state-controlled energy terminals operator.

The group says the planned reorganization is unlawful and violates the rights of minority shareholders.

Energy Minister Zygimantas Vaiciunas told BNS on Tuesday that the government's plan to cut the LNG terminal charge for consumers by 40 percent in the fourth quarter of 2019 would be implemented despite the row with Achemos Grupe.

Achemos Grupe, which owns 10.41 percent of shares in Klaipedos Nafta, wants to have the same shareholding in SGD Terminalas, whose revenue will account for around 70 percent of the parent company's total revenue.

Klaipedos Nafta expects to cut the LNG terminal's running costs from some 66 million euros to 43 million euros by borrowing funds from banks and spreading out the costs over a period of 25 years, until 2044. Achemos Grupe alone would save 5 million to 6 million euros in costs annually.