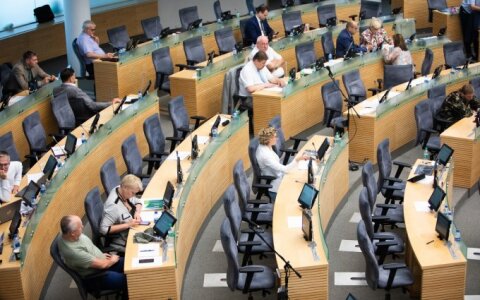 The Seimas of Lithuania will vote one whether to bury carbon dioxide, the key gas causing climate change, mainly emitted by industry and energy companies.

The Committee on Environment Protection is proposing banning the storage of such gas in natural land cavities and it has already deliberated the proposed amendments several times.

But the Seimas will vote on the proposal by Virgilijus Poderys, chairman of the parliamentary Commission for Energy and Sustainable Development. He suggests a more liberal carbon dioxide burial order and proposes banning the use of underground to store carbon dioxide, including that imported from abroad, in depth of less than 1 km.

The Environment Ministry has warned that it would be impossible to extract carbon dioxide once it's buried. But the Energy Ministry says there's no point in extracting it as it will turn to rock and minerals in several years spent underground.

Environment Minister Kestutis Mazeika suggests considering using such gas in agriculture. Meanwhile, the Lithuanian Geological Survey has warned buried carbon dioxide might pollute other layers and then get out into the atmosphere through cracks.