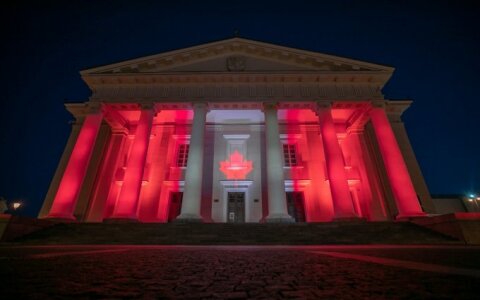 As Canada celebrates its birthday on 1 July, namely, the 152nd anniversary of the establishment of confederation, the Town Hall of Vilnius was lit up in colours of the Canadian flag. Vilnius city municipality and the Embassy of Lithuania in Canada congratulated Canadians, who are staying in Lithuania or live here, in an original manner, writes vilnius.lt.

„We highly appreciate the Canadian and Lithuanian alliance – Canada has always been with us, believed in our freedom, always knew that our country was occupied. When we celebrated the 70th anniversary of our Declaration of Independence signed in Minaičiai, Canada made a very beautiful and symbolic gesture – on 16 February Niagara Falls were lit up in colours of the Lithuanian flag. In turn, Vilnius city dwellers congratulate all their friends in Canada and Canadians who live and work in the capital city of Lithuania on the occasion of Canada’s birthday – today a big Canadian flag can be seen lit up on one of the key buildings of the city, namely, on the Town Hall of Vilnius. Today we celebrate together with our friends in Canada,” Vilnius city mayor Remigijus Šimašius said.

Related articles
Vilnius decorated in road signs of the Way of St. James
Vilnius Town Hall to be lit in Canadian flag colors on Canada Day

Canada has become the second motherland to tens of thousands of Lithuanians who were forced to move to the West due to the Soviet occupation. Canada has never recognised Lithuania’s annexation to the Soviet Union. Ties between the two nations have remained strong – Canada is a loyal Lithuania’s partner in NATO: Canadian soldiers deployed to Latvia ensure Lithuania’s security as well.

One of the biggest Canadian cities – Toronto – has become home to thousands of Lithuanians who fled from the Soviet occupation. The city has a few buildings and locations given Lithuanian titles: Lithuanian’s Centre Anapilis; besides, there is a Lithuanian cemetery of St. John and a Lithuanian park. In addition, a Lithuanian symbol – the Columns (or Pillars) of Gediminas and an inscription Vilnius Manor – can be seen on the multi-storey building on the Bloor Street West street. The building is a retirement home where among others elderly Lithuanian emigrants live. Vilnius and the biggest Canadian city Toronto are officially cooperating cities.