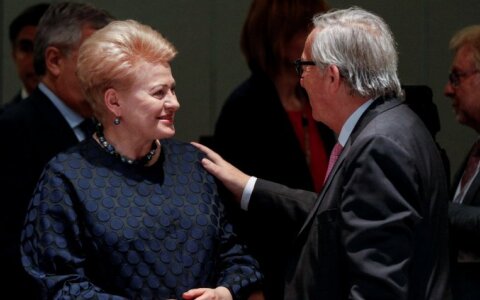 The ongoing difficult division of EU posts reflects the growing influence of European parties, and the majority of Lithuanian politicians' weak involvement in their activity reduces Lithuania's influence on common decision-making, diplomats say.

Taking place since Sunday in Brussels, the talks on who will lead the EU's major institutions mainly focus on party affiliation, and not the geographical or gender balance.

Four officials related to EU activity from different institutions talked about these tendencies with BNS Lithuania, willing to stay anonymous due to the sensitivity of the issue.

Grybauskaite's non-affiliation as her main "flaw"

The proposal by the German and French leaders to Dutch socialist Frans Timmermans to become the European Commission's president was on Sunday rejected by the European People's Party uniting right-wing politicians.

Related articles
Poland doesn't back Grybauskaite for EU position
Grybauskaite as next president of European Council: strengths and weaknesses

Party meetings considering candidates have not included either Lithuanian President Dalia Grybauskaite, or Prime Minister Saulius Skvernelis, or the country's other political leaders. Lithuania's President-elect Gitanas Nauseda is also not affiliated with any European political party.

Several diplomats say Grybauskaite stands little chance to become president of the European Council due to her lack of party affiliation, despite being a perfect candidate meeting other criteria as having European experience, being a woman and representing the Eastern European region.

"Party influence is growing, and we, as a smaller, country have less and less chance of influencing processes and get one or the other post," another diplomat said.

Diplomats say the latest summit reflects the long-standing tendency as party groups' influence has been growing for the past few years.

Practically every European Council meeting is preceded by party meetings where future issues are discussed by leaders belonging to the same political groups.

Although any Lithuanian president's involvement could raise doubts on whether it complies with the constitutional non-affiliation principle, Lithuanian politicians themselves fail to act in other formats.

Among Lithuanians, representatives of the Homeland Union-Lithuanian Christian Democrats are seen as the most active in European party structures, with other parties being considerably more passive.

"European parties' influence on decision-making is growing, and Lithuania is hardly taking part in the party game, excluding the EPP. Lithuania's policy is rather provincial in this respect," one diplomat told BNS Lithuania.

The ongoing talks on EU posts will continue from midday on Tuesday (Lithuanian time), with intense consultations taking place until then.

"Nothing has been agreed so far yet. New names might come into play, some indicative votes could take place, with some candidates having more chances," one diplomat directly related to the ongoing talks told BNS Lithuania.