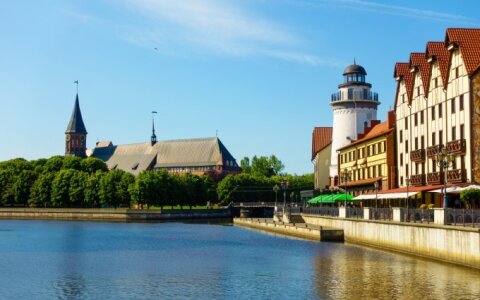 Moscow has formally notified Vilnius that Lithuanians will be able to travel to Russia's Baltic Sea exclave of Kaliningrad with a free e-visa starting July 1.

Tatyana Novozhilova, head of the Consular Section at Russia's embassy to Lithuania, confirmed to journalists on Wednesday that the new e-visa system for foreigners visiting Kaliningrad will be introduced on July 1, adding that citizens of 53 countries, including all EU member states, will be eligible.

"I think the facilitated procedure will allow people to travel for private purposes and to meet with their relatives who live in the territory of Russia more often," the diplomat said.

"In my opinion, this is a good, positive step for citizens who live in the countries mentioned in the list, especially Lithuania, Latvia (and) Estonia, because the ties of kinship and friendship remain," she added.

The Lithuanian Foreign Ministry said earlier on Wednesday that it has received a note from Russia informing it that "Lithuanian citizens will be able to receive a free-of-charge electronic visa for travel to the Kaliningrad region for tourism, business or humanitarian purposes".

Related articles
Lithuania asks Russia to ensure security of its embassy in Moscow after threatening letter
Transport Minister: new airport could be built between Vilnius and Kaunas  (1)

Novozhilova said those traveling for purposes other tourism, business, humanitarian or cultural will have to apply for a conventional visa through the embassy.

Russian officials expect that the new procedure will help attract more tourists to the exclave.

To obtain an e-visa, Lithuanians will have to fill in an electronic form on the Russian Foreign Ministry's Internet site at least four calendar days before the planned trip.

The new single-entry e-visa will be valid for 30 days with a period of stay of up to eight days. It will not allow the holder to travel to other parts of Russia.

The full list of countries and border checkpoints through which e-visa holders will be allowed to enter the Kaliningrad region will be published on July 1. The list includes Khrabrovo Airport.

Other countries whose citizens will benefit from the visa program will include Bahrain, India, Indonesia, Qatar, China, North Korea, Kuwait, Malaysia, Mexico, Saudi Arabia, Singapore, Turkey, and Japan. The United Kingdom and the United States are not on the list.