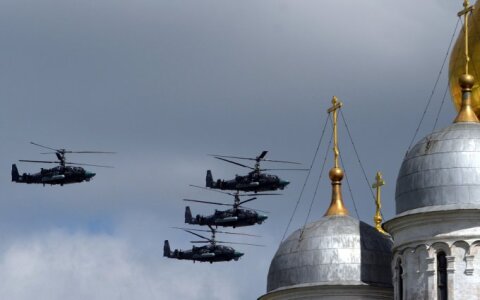 A Lithuanian court has found two persons guilty of spying for Russia and issued them prison sentences of four years and nine months, a court spokesman said.

One of the persons used to work at the Lithuanian Air Force's Air Base in Siauliai, northern Lithuanian, until his detention, and the second had already retired. They were on Thursday found guilty by Siauliai Regional Court, its spokesman Vytautas Joncas told BNS Lithuania.

The court confiscated almost 6,500 euros seized during the search from one of the men.

"The ruled that the mentioned persons committed a crime, acting in a group, and they shares roles, with one of them collected information directly, and the other one acted as an intermediary. The group operated for around five years," Joncas told BNS Lithuania.

The case was heard behind close doors. Both defendants pleaded guilty. The prosecutor had demanded prison sentences of six years.

Starting in the fall of 2014, the espionage activities at the Aviation Base involved photographing official documents, the layouts of premises and the airport, plans and facilities, and orders and decisions by the command, and other non-public but not classified data for a foreign intelligence agency.

Secret meetings with Russian intelligence officers were held in Russia or other foreign countries and various conspiracy measures were involved.

"Acting on the orders of a foreign state's intelligence organization, the defendants provided regular hand-written reports on the completed tasks. All in all, over 35 cases of handover of information of identified nature," prosecutor Redas Savickas, prosecuting, who also lead the pre-trial investigation, was quoted as saying in a statement released by the Prosecutor General's Office.