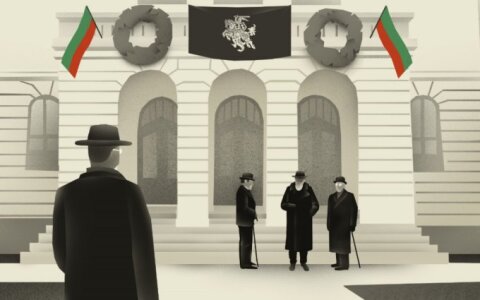 In 2017-2019, the Lithuanian film industry has experienced remarkable growth. As a result, Lithuanian animation and VR gained plenty of international attention. Recent world premieres took place at the Venice Film Festival, DOK Leipzig Film Festival and other festivals with some of the titles successfully competing at the main programs, informs Lithuanian film centre.

So far, 2019 looks promising, too. Two Lithuanian animated films, The Juggler by Skirmanta Jakaitė and Winter in the Rainforest by Anu-Laura Tuttelberg (coproduction with Lithuania), were selected for the Annecy International Animated Film Festival. Another three short films are about to be completed and will have their premieres this year.

In 2017-2019, the Lithuanian Film Centre supported the production and development of 6 animated films (two of them were coproductions) and 2 VR films by €795 970.

Below you can get acquainted with the recent award-winning contemporary animated films and VR projects from Lithuania.

VR film by Kristina Buožytė celebrated its world premiere at the Virtual Reality program of the 75th Venice International Film Festival 2018. Trail of Angels is a tribute to a famous Lithuanian painter and composer M.K. Čiurlionis. It’s an immersive virtual reality animation that invites the viewer to explore the magic world of Čiurlionis’ paintings and interact with their environments and characters while listening to his music. Trail of Angels is one of the first VR projects in Lithuania.

The newest animated short film by Skirmanta Jakaitė is a story about the other side of life - the scary, unknown side that we never fully grasp, but we are aware of existing: somewhere near, very close. The film is promised to be an allegorical animation about how humans spend their lives juggling their responsibilities. The Juggler had its world premiere at DOK Leipzig Film Festival, was selected for the International Film Festival Rotterdam, Animafest Zagreb and Annecy and won two awards as the Best Film Project at the Baltic Pitching Forum and the Best Female Director at Animakom.

This is the first Lithuanian animated film produced with the help of the Lithuanian Tax Incentive scheme.

Debut puppet film of animation director Birutė Sodeikaitė talks about a girl who is trying to deal with her illness. Imagining the illness as a lion and herself as a unicorn she goes through different stages of acceptance.

The film was nominated for the European Animation Awards “Emile” for the Best Background and Character Design in an Animated Short Film category, and participated in more than 30 international festival worldwide. Sodeikaitė is currently working on her new stop-motion film Elena. It has already been awarded as The Best Film Project at the Baltic Pitching Forum 2017 and the Aubagne International Film Festival Award at the European Short Pitch 2018, Poland.

The debut animated short by Gediminas Šiaulys is a story about the eternal, never-ending miracle of life and death. It is a sad but bright and hopeful fairy-tale for children. The film has been screened in more than 70 international festivals worldwide and won awards at the Animation Block Party (USA), Wordless International Short Film Festival (Australia), Geneva International Independent Film Festival (Switzerland), Festival Internacional de Animacion (Colombia) and many more.

The Goat Luck – Bad Luck is a funny and ironic film by the most famous Lithuanian animator and illustrator Ilja Bereznickas. He is a key figure in the Nordic and Baltic animation scene with his career spanning over four decades, including work for an animated feature in Norway during the nineties.

His newest production The Goat Luck – Bad Luck is based on the humorous folklore stories of pre-war Lithuanian Jewish community, famous for a wonderful human trait to see the positive and play down the horrible side of any circumstances.

Matilda is a story about a girl who wishes to be the smartest in the world. When all the things she’s learned can no longer fit into one head, her mother buys her one more as a backup.

It’s an animated story about the modern families and challenges they experience nowadays.

The film tells a story about freezing winter in a war devastated nowadays Vilnius. A thirty-year-old guy is living in a squatted apartment with a group of strangers. One night he nearly burns the flat down wanting to sleep warmer. His roommates start hating him, so the guy has to find another shelter.

Estonian-Lithuanian-Mexican co-production Winter in the Rainforest by Anu-Laura Tuttelberg tells the story about nature. Shot in the tropical rainforests of Mexico and Peru, this film captures the eternal dance of life and death as experienced by magical creatures of porcelain - animals, birds, insects and flowers - fragile and resilient at the same time.

Winter in the Rainforest has already been awarded for The Best Film Project at the Baltic Pitching Forum, Lithuania. The film will have its world premieres at Animafest Zagreb 2019 (Croatia) and ANNECY IAFF 2019 (France).

Hopscotch and the Christmas Tree by Katerina Lavrionova is a half hour animated special based on the children’s book of the same name. The film tells a charming story of a happy little horse called Hopscotch and her animal friends as they set out to find the perfect Christmas tree.

It’s the first Lithuanian TV animation project. The special has been presold to the following television broadcasters: Finnish national broadcaster YLE, V-Me (US Hispanic), RTV Slovakia, ERR Estonia, Latvian TV, and LRT Lithuania. It has also been picked up by the French distributor KMBO Films for theatrical, video, TV and VOD rights in the French speaking Europe.

The project is a Lithuanian-Irish coproduction between Kino Mind Films and Ink and Light. Hopscotch and the Christmas Tree was commissioned by RTÉjr with additional support from Screen Ireland and the Lithuanian Film Centre.