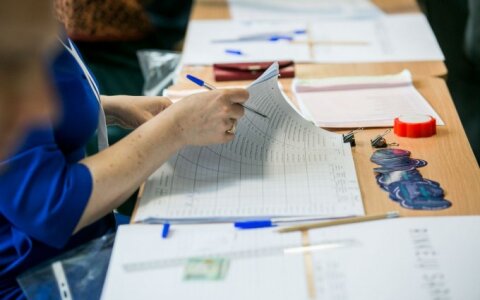 The minister noted that expatriate voters were three times as active in this year's presidential election as in the 2016 Seimas election.

"We must immediately begin to consider the necessary legislative amendments to make this possible in the next parliamentary election in 2020," he said.

Under the existing law, Lithuanian expatriates' votes in a parliamentary election are added to the count at the Naujamiestis constituency in Vilnius.

Two Farmers and Greens MPs, Virginija Vingriene and Kestutis Mazeika, have registered an amendment calling for setting up a special single-member constituency for Lithuanians living abroad.

Related articles
Every vote counts: Lithuanian had to pay 50 eur to vote
Liberals offer to give one single-mandate electoral district to Lithuanians abroad

The Liberal Movement's parliamentary group has drafted a Seimas resolution that calls on the Central Electoral Commission to give one single-member constituency to expatriate voters.

Some 52,812 Lithuanian citizens cast their ballots abroad in the first round of May's presidential election and 44,142 in the runoff, compared with just over 16,400 in the 2016 Seimas election.

Previous attempts to set up a special constituency for expatriates fell through in the parliament.