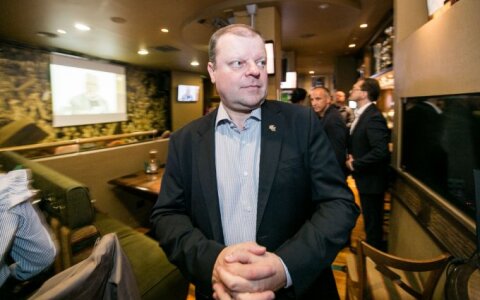 Lithuanian Prime Minister Saulius Skvernelis says he will seek a major Cabinet reshuffle if he stays in his post after the new president takes office.

"If it were my decision, the Cabinet would change, and change substantially," he told journalists on Tuesday.

The prime minister refused to elaborate on this issue.

Skvernelis did not reveal if he would return his powers to the new president following the inauguration or resign from his post. He said he had not yet met with President-elect Gitanas Nauseda.

"I'll give the details when I think it's necessary," the prime minister said when asked about his plans.

"In any case, I am a politician who is responsible for what is happening in the state; I am a prime minister and, in any case, both as a person and as a citizen, and as politician, I am in favor of stability and I do not want the new leader of the state to face a political crisis at the start of his presidency," he added.

Skvernelis also said he would want to take an active part in talks on expanding the ruling coalition.

"I'd like to actively participate in the expansion of the coalition. Decisions (after) the July 12 (inauguration) will depend on the makeup of political forces in the Seimas," he said.

The Lithuanian Farmers and Greens Union (LFGU), the parliament's largest party which delegated Skvernelis to his post, said before the first round of the presidential election they would quit the government if its candidates showed poorly in the presidential and European Parliament elections.

After the first round of voting, however, the Farmers and Greens said they were staying in the government and would seek to expand the ruling bloc to include the Order and Justice and the Electoral Action of Poles in Lithuania–Christian Families Alliance (EAPL-CFA)

The two parties often back the ruling bloc's initiatives in the Seimas.

Nauseda, an economist who stood as an independent in the election, won Sunday's runoff against Ingrida Simonyte, a lawmaker and former finance minister.

The new president will be sworn in on July 12.

Under the Constitution, the government must return its powers to the newly-elected president, who must propose his or her candidate for prime minister to the Seimas within 15 days.

The Constitutional Court has ruled that the president must nominate the same person for prime minister if the ruling majority has not changed. If the Seimas endorses the prime minister again, the president formally appoints him or her and gives them the mandate to form the next Cabinet.