Lithuanians made their choice: Nauseda to lead country for next five years 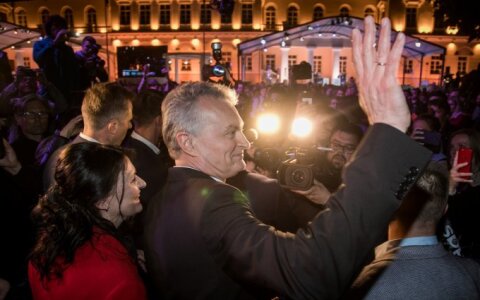 Independent economist Gitanas Nauseda won Lithuania's presidential election on Sunday after defeating Ingrida Simonyte, a member of the parliament supported by the conservative Homeland Union–Lithuanian Christian Democrats, in the runoff.

With all the country's 1,972 polling districts counted, the results showed Nauseda won the race with 65,86 percent of the votes against Ingrida Simonyte's 32,86 percent.

Political experts say votes from the capital and the country’s second-biggest city are likely to be more favorable to Simonyte, a former finance minister nominated by the conservative Homeland Union–Lithuanian Christian Democrats (HU-LCD).

Voter turnout in the presidential runoff was 53.43 percent, the Central Electoral Commission, or VRK, said after the polls closed at 8 p.m. on Sunday.

The turnout rate is lower than in the first round two weeks ago but higher than in the second round of voting in the 2014 presidential election.

Before all votes were presented to Central Electoral Commission G. Nauseda said that he hoped that working with other institutions he would reach a better life for Lithuania.

The newly-elected president vowed to work with the parliament and the government toward reducing the social divide in the country.

"This support gives trust and the worst that can happen is to lose that trust", spoke he.

Also, he noted that by his character features he is a different person than President Dalia Grybauskaite.

The president-elect also mentioned that he will soften the rhetoric toward Russia, but underlined that Lithuania’s relations with Russia will not change substantially until Moscow alters its behavior toward Ukraine.

G. Nauseda said he would like to live in his own home in Pavilnys, a suburb of Vilnius, but he will have to discuss this issue with the VIP protection department.

Meanwhile, president candidate I. Simonyte congratulated her competitor in the runoff and added that the world with the runoff did not end.

"Tomorrow will come and I will be there", said she.

I. Simonyte was trying to explain why the results were not in her favor.

"The turnout rate of the runoff was not so different from the first round. It is logical that people whose candidate did not pass first round came to vote now and chose G. Nauseda as a more preferable candidate. I really hope that he was chosen by people because they wanted to vote for him and not against I. Simonyte", added she.

Simonyte conceded her defeat and wished her rival "success in uniting all people".

"Some 450,000 voters behind you are not someone to whom you can say easily, 'Thank you very much for the flowers and I'm going back to growing my daffodils," she told the public broadcaster LRT.

"Congratulations Lithuania with a new president. I wish that all hopes of people would become real works. A lot of strength and luck to Gitanas Nauseda", she posted on her Facebook profile.

Lithuanians made their choice: Nauseda to lead country for next five years