Karbauskis rules out voting for Simonyte in Lithuanian presidential runoff 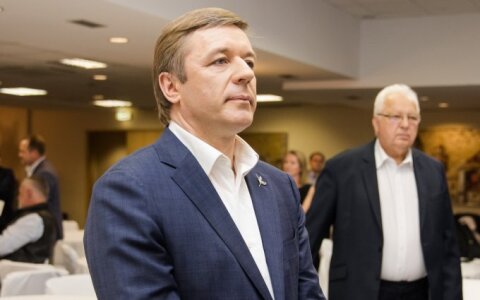 Ramunas Karbauskis, leader of the ruling Lithuanian Farmers and Greens Union (LFGU), has ruled out voting for Ingrida Simonyte, the presidential candidate of the conservative Homeland Unionâ€“Lithuanian Christian Democrats, in the May 26 runoff.

"I'll definitely not vote for Simonyte," he told Ziniu Radijas on Thursday morning.

Karbauskis says Simonyte, who has in the past served as finance minister and deputy governor of the central bank, is responsible for Lithuania taking out responsible loans during the economic crisis.

The LFGU leader told the radio station he had not yet decided whether to vote for Gitanas Nauseda, an economist standing as an independent in the presidential election.

Viktoras Pranckietis, the speaker of the Seimas, has hinted that he will support Simonyte in the runoff because he knows the parliamentarian better than her contender.

Karbauskis rules out voting for Simonyte in Lithuanian presidential runoff