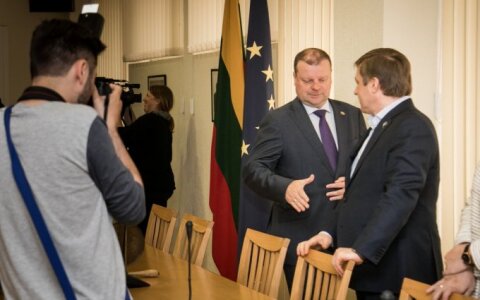 Lithuanian Prime Minister Saulius Skvernelis has survived a vote of no-confidence by the ruling Lithuanian Farmers and Greens Union's political group in the Seimas, and the LFGU group has also changed its position and wants to stay in the ruling majority.

"The political group has confidence in me as prime minister, and it's very important for me. (…) The most important thing is that the group made the decision not to withdraw from the ruling majority, and how the government will be formed (after the presidential election – BNS Lithuania) is another thing," Skvernelis told journalists on Tuesday night after the LFGU group's meeting.

During a secret ballot on Tuesday night, all 46 group members who attended the meeting voted in favor to express confidence in the prime minister. The prime minister himself had asked for such a vote and he did not take part in it.

After the first round of voting in the presidential election on Sunday when Skvernelis came in third, both the prime minister and LFGU leader Ramunas Karbauskis expressed their wish to test the party's confidence in them.

Karbauskis, elder of the LFGU political group's in the Seimas and the party's leader, said on Tuesday all group member who attended the Tuesday meeting were in favor of remaining in the majority.

Karbauskis says his party will make the final decision on remaining in power or withdrawing after a new president is elected.

On the election night, Skvernelis vowed to step down as prime minister on July 12 but was not that categorical on Tuesday.

"I will act pursuant to the Constitution, and I have two ways: to return my powers or resign. I will choose one of them," he said.

After speaking about withdrawing from power earlier, Karbauskis told journalists on Tuesday he's listening to colleagues and understands that "nobody wants to assume responsibility."

Nominated by the LFGU, Skvernelis received 19.67 percent of votes in the first round of voting in the presidential election on May 12 and failed to get into the runoff.

Karbauskis said earlier his party would walk away if the party's candidate Skvernelis failed to get into the presidential runoff and the party loses the European Parliament election. Such a scenario was earlier backed by the LFGU political group in the Seimas.

On Tuesday, the LFGU also spoke about whether they should support one of the two candidates, but Karbauskis said no decision was made.