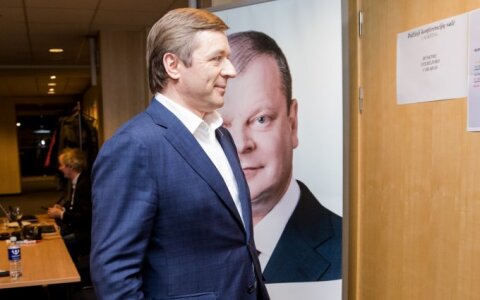 The council of the Lithuanian Farmers and Greens Union (LFGU) is likely to hold a vote of confidence not only in Ramunas Karbauskis, the ruling party's leader, but also in Prime Minister Saulius Skvernelis, the party's presidential candidate who failed to make it to a runoff.

"The prime minister also wants to find out if he has the party's support. A vote of confidence in myself and the prime minister will likely take place," Karbauskis said after a meeting of the LFGU political group in the Seimas on Tuesday.

Skvernelis also confirmed this to reporters after the meeting.

"Certainly, by secret ballot at the party's council," he said.

However, it is not clear yet if the council will hold confidence votes during its next meeting on Friday or later.

Karbauskis said he was sure that the party would express its confidence in the prime minister.

"We have no doubts about that, but he (Skvernelis) wants to check if he still has the confidence (of the party) and I want this, too," he said.

The agenda of Friday's meeting of the LFGU council does not include either confidence votes or the issue of the party's staying in the ruling coalition, according to Karbauskis.

"On Friday, we'll discuss mobilization for the European Parliament elections. There is no such item on the agenda, but if the council decides to discuss this, it will be discussed," he said.

The party's congress would hold a confidence vote only in the outcome of the council's vote is negative, according to the LFGU leader.

When asked if he was sticking to his position that the LFGU should pull out of the ruling bloc after its candidate's poor showing in the presidential election, Karbauskis said "if the party decides that the results as poor, that will be a decision to withdraw".