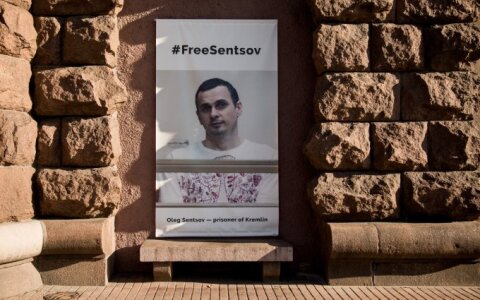 "Five years since Oleg Senstov, Ukrainian film-maker and activist, was imprisoned by Kremlin for absurd charges. Together with international community we reiterate our call on #Russia to release Oleg and the rest of #Ukraine’s political prisoners. #SaveOlegSentsov," the minister tweeted.

Sentsov was detained in Russia-annexed Crimea and sentenced to 20 years in a Russian prison on charges of terrorism in 2015.

Lithuania and other countries say the charges were fabricated to punish the filmmaker for his civic initiatives.

A year ago, he held a 144-day hunger strike to demand the release of all Ukrainians held in Russia.

Sentsov's lawyer has said the film director was diagnosed with heart, liver and kidney problems due to the hunger strike.