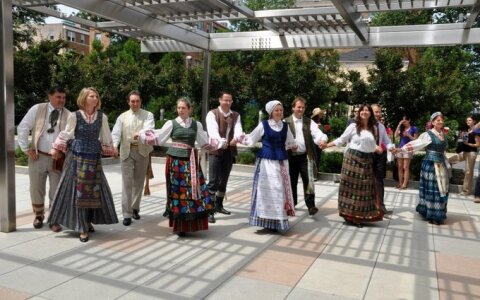 “We are glad that Lithuanian dances are danced and songs are sung around the world. We are grateful to those of you, who establish Lithuanian folk art ensembles and groups far away from Lithuania, and participate in song and dance festivals, thus creating a Global Lithuania. It is symbolic and meaningful that in this year, which has been designated as the Year of World Lithuanians, we gather here today to celebrate the 60th anniversary of your dance group. This anniversary is of great importance to Lithuanianness,” said L. Linkevičius.

The Chicago area dance group “Grandis” was founded in 1953. Its activities were once temporarily suspended, so the group celebrates its 60th anniversary in 2019. “Grandis” is one of the major Lithuanian dance ensembles in North America. It is also the oldest Lithuanian folk dance group in Chicago and its neighboring suburbs. The ensemble has performed in many Lithuanian communities in the United States and Canada, also in Venezuela, Brazil, and Australia. Since 1992, the group has participated in the Song and Dance Celebrations in Lithuania.

“The Golden Bird” is awarded annually by the Ministry of Foreign Affairs together with the Lithuanian National Culture Center to amateur arts groups of Lithuanians living abroad.