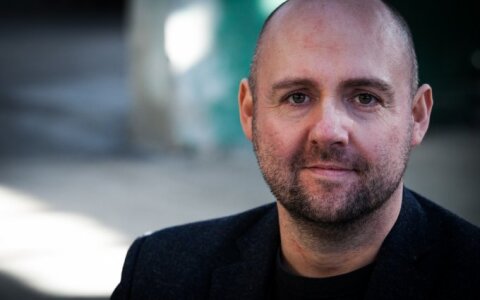 Once a professional badminton player, now Jonathan Low from Denmark is better known as a successful entrepreneur and business author. He achieved a lot of experience in the fast-changing business world by establishing many businesses and also advising for startups.

Lately J. Low started to share his experience by writing. Both his latest books, “Listen Louder” and “The Disruption Book”, made to the top of the bestseller-lists in 2015 in the category “Business and Entrepreneurship”.

In June J. Low is coming to Lithuania to be one of the speakers at Login conference in Vilnius. Before his visit to the event, DELFI shares his thoughts about the startup world and what is common between badminton players and entrepreneurs.

- Can anyone be an entrepreneur?

- Yes. I think it’s very much about the mindset and acceptance of the core foundation of what it means to be an entrepreneur.

I always describe entrepreneurship as a combination of passion and panic. When I start a new company, I have both feelings at the same time. Extreme passion for what I do. The extreme panic that it will fail. I hate to fail, so I can’t really avoid that feeling, and I actually think that you need both feelings to really succeed with what you’re starting.

In addition to this, it's understood that entrepreneurship is like a marathon, not a sprint. Once you get the idea, you’re 1% of the journey. The idea is really nothing. Ideas are like dreams. They’re fun to have and share, but everything is about execution. You can have a crap idea and still create a great business, but you can’t turn a great idea into a great business if your execution is crap. So great entrepreneur execute, fail, learn and repeat this process again and again until it works. They’re stubborn but willing to learn and listen at the same time.

- What is a successful entrepreneur?

- I think that there are very different views on this topic. To me, the answer is that a successful entrepreneur is not one thing or one criteria. For some, it’s being able to pay your bills. For others, it’s creating a real impact in the world. For others, it’s the financial freedom to do whatever you want here in life. I don’t want to be the moral judge, who says what is right, and what isn’t.

To me, it’s much more than the money. It’s the feeling that I wake up with and go to sleep with. That I live a life worth living.

- What similarities do you see between badminton players and entrepreneurs?

- Very few badminton players because very rich living out their passion for the sport. It’s the same with entrepreneurs. You have to be a little mad, because why invest so much time and effort when the success rate is so low.

I think that what professional sports and entrepreneurship have in coming when you exclude the sports with very large money involved, is that we’re great at attributing meaning to what we do. You don’t get up in the morning and train for 3-4 hours to become a great squash player unless you really love your sport. You love your sport because you like the feeling it gives you. You like the feeling it gives you because you’re able to attribute meaning to what you do. Make it meaningful. 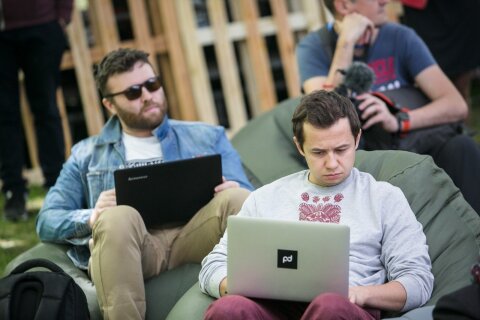 It’s the same with entrepreneurship. Entrepreneurs are passionate about stuff that often seems silly or meaningless to the majority of people, but for the entrepreneur, it becomes the most important thing in the world. I love this ability to attribute meaning to things we do because otherwise, life would be very empty. It’s our brains and body’s ability to make meaning that creates both badminton players and entrepreneurs.

- You have a lot of experience working with different young entrepreneurs. What are the most common mistakes they do?

- I know that most companies fail because of what we call ‘premature scaling’. This basically means that you start investing too much money before you have created a product-market-fit. A product-market-fit means the tipping point, where you know that the market loves, what you do, and you just need more capital to grow more customers and traction. However, a lot of startups are so eager to become successful that they invest too many resources into marketing and team, before they have actually proven their product. And therefore they fail because they have scaled prematurely.   One more common mistake is focusing too much on competitors. You can’t really create new business without having competitors, but rather than focusing on them focus on creating something that you’re really proud of. If you do this, people will love it and share it for you, instead of you focusing on just being cheaper than your competitors. It might work in the beginning, but you will not create a great company culture that can last.

Finally, I think that having a plan A, B and C are sometimes lacking amongst startups. I have never seen an excel-document or a business plan that actually turned out totally right because the future is no unpredictable. Therefore, always have a plan B and C, when plan A fails, because it will. If you don’t have these plans, you will most likely run out of either time, money or both.

- In the world of business, it is usually stressed how it is important not to give up. But when should an entrepreneur understand that it’s time to give up with a particular project and move on?

- For one of my books, I interviewed Steve Blank, who is the founder of the Lean Startup method, even though his student Eric Ries was the one who popularized the concept. I think that Lean Startup is a great tool for understanding when it’s time to move on or continue exploring.

In Lean Startup, you call it ‘the pivot’ when you decide to change strategy and focus and go on a completely new journey. It’s of course still gut feeling to some extent, but with Lean Startup you focus on customers, market and learning all the time, and those are really good metrics to understand whether you have a good business idea or not. 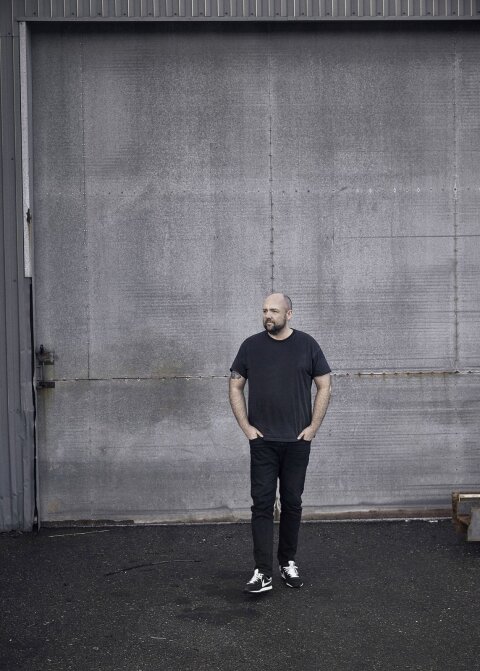 You can still have a great idea that is worth investing your time and life in, but when we’re talking business it’s a different ball-game. Not all great ideas are also great business ideas. At the end of the day, only the market can decide, whether it’s also a viable business or not.

- At the moment you are working with a startup JumpStory. Can you explain what is an idea behind it?

- Our vision was and is to change the way that the visual industry works. Currently, we see the visual content industry being very similar to music 20 years ago. In 1999 you have two major players: Napster and the record labels. Napster was this disruptive initiative, where everyone could share music with one another. No, it wasn’t legal, but it was visionary and tried to challenge the existing industry, where the record labels focused on suing everyone that dared to copy a CD from a friend or relative.

Napster was shut down, the record labels lost their power and iTunes and Spotify took over the industry. They managed to take the best from both worlds and opposites and create a profitable middle ground.  JumpStory is on the same journey, just focusing on images, icons, illustrations and other kinds of visuals instead.

We see an industry, where there are the big players like Getty, Adobe, Shutterstock, and others, who also have a very large business focus on legal stuff and hunting down people that they think to violate their terms. On the other hand, we have free websites for photos, or people google images and just use them, but in fact, 80% of all of this content is illegal to use. So we’re really missing a company that is solving the copyright issues, but in a way where the pricing and business model is not unfair, as we believe it is with the big players. So JumpStory is trying to create the iTunes for visual content so to speak.

- We are living in the world overloaded with information, apps, entertainment offers. How can an entrepreneur get the attention of the crowds in the most effective way?

- At JumpStory we talk about the idea of ‘simplexity’. Simplexity is the skill of creating products, design, services, and storytelling in a way, where you have complexity in your product design because that is what gives the product some depth and value, but you have simplicity in the UX, the communication and everything related to your customers.

An example of ‘complexity’ in both ‘back-end’ and ‘front-end’ would be the intranet. Most intranets are built by developers for developers. Therefore most people have intranet because it doesn’t make their life easier. It continues to be complex. 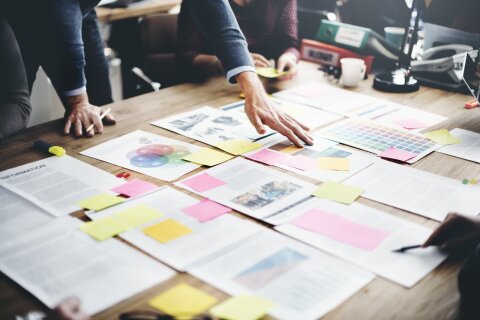 On the other hand, products that really get the attention of the crowds, are typically great at Simplexity. Just take solutions like Asana, Slack, Trello, Skype and many others. None of these solutions solved a problem that other companies hadn’t already tried to solve, but they did it in an extremely intuitive and simple manner. Therefore, people loved them, and the crowd spread them. They were not really brands. They turned into movements because they understood the game of simplexity.

- Can you remember from your entrepreneurial experience what was the biggest lesson you had gotten?

- I remember that I was invited to have dinner with the famous actor Richard Gere back in 2007. I was running a charity-business, and we wanted Richard to become our ambassador. However, I was really, really nervous to meet him, because even though I never get star-struck, I was feeling the nerves here. I mean, after all, it was Mr. Pretty Woman himself.

Then my mom gave me a great piece of advice before I traveled to New York to meet up with him. She told me: Just envision Richard Gere wearing a diaper. Remember that he was also 2 years old and has to scream for his mother when he had an ‘accident’ in his diaper. We were all just small and helpless children once.

I took this piece of advice with me, and I actually imagined Richard Gere wearing a diaper that day, when we sat down to have dinner. It helped a great deal, and I can recommend the ‘diaper-trick’ to everyone that has to meet with people, where they might feel star-struck, nervous or like the underdog.

Don’t feel like that. Just have them wear an imaginary diaper in your head, and they will feel a lot less intimidating to you. This lesson can get you far in life because then you’re no longer afraid to talk to anyone. You can pitch your idea to the most powerful people in the business well and do it with great confidence and ease because they’re just like to. We’re all one.