Skvernelis promises to sell his house to Mazuronis for its declared value Upadate: PM back-pedals on his promise 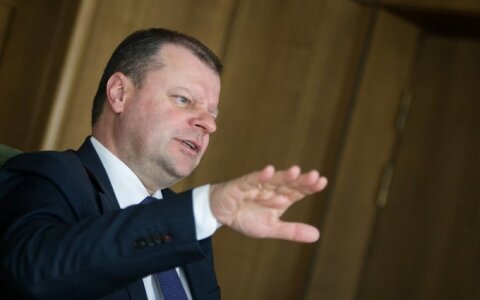 Lithuanian Prime Minister Saulius Skvernelis, who is running for president, has promised to sell his house in Vilnius to MEP Valentinas Mazuronis, another presidential candidate, for its declared value.

In a live LRT television debate on Thursday evening, Mazuronis said tax disparities exist in the country where even luxury items or real estate are not taxed, referring to the houses owned in Vilnius by his opponents Gitanas Nauseda and Skvernelis.

The MEP said he doubted whether the declared value of Skvernelis' house actually matches the real market price of the property.

Skvernelis said, "If you have a suit sewn and pay 100 euros, then that suit is actually worth 100 euros. Do you think that the suit of a respected prominent politician will be sold for 500 euros in the market? This is the reality. The amount that was actually spent, invested is declared."

"Dear Prime Minister, I will buy your house for your declared value tomorrow. Sell it," Mazuronis said in response.

Related articles
Prime minister: my predecessors were negligent in not talking to Belarus about N-plant
Lithuanian PM: 2009-2010 crisis probe will not affect investment environment

"Agreed! Buy it!", replied Skvernelis, but added later that he would have to discuss it with his wife and called Mazuronis' remarks "demagogy".

The declared value of the prime minister's property, including land, is 130,000 euros.

Eight presidential candidates took part in the televised debate that focused on economic and regional policies.

Lithuania will hold the first round of presidential elections on May 12, with a runoff scheduled for May 26 if none of the candidates wins an outright majority.

Later in the day, Prime Minister Skvernelis said he would not sell his house in Vilnius to MEP Mazuronis.

"I'm glad that Valentinas Mazuronis spent a happy night. However, my wife did not agree to sell the house," he said in a comment sent to BNS by Skirmantas Malinauskas, head of communications of his presidential campaign headquarters.