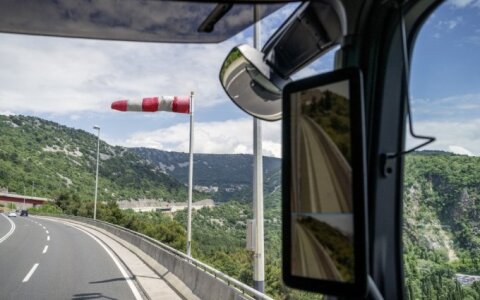 In fear of new EU restrictions, Lithuanian haulage companies threaten to relocate their businesses to Poland or other countries to be closer to their key markets in Western Europe.

Mecislavas Atroskevicius, secretary-general of the national road carriers' organization, Linava, says transport companies are looking for ways to protect their businesses if the EU's new Mobility Package comes into force.

"Haulers have to plan and protect their business somehow (...). People and politicians say they (haulers) will not move anywhere and things will stay as they are, but we have information that although the process is not massive, businesses are already moving out in small numbers," he told BNS.

"If the process gains momentum, it will be really difficult to stop it," he added.

According to the Linava official, Poland is attractive to Lithuanian transport companies in that it is closer to Western Europe, and France and Germany in particular. If the requirement for trucks to return to their country of registration every four weeks takes effect, truck drivers will have to drive back to Poland, rather than to Lithuania.

"They will be able to cross the border at Frankfurt-Oder, enter Poland, have a rest, fill their tanks with Polish fuel and then drive back to Germany, which remains our main market," he said.

The official added that haulage companies might also relocate to France, Germany or other countries.

"As far as the Mobility Package is concerned, we are interested in being as close as possible to the center we provide our services in, and we mostly serve the largest economies -- France, Germany and the Netherlands. In the future, haulers may relocate to the Benelux countries, too," he said.