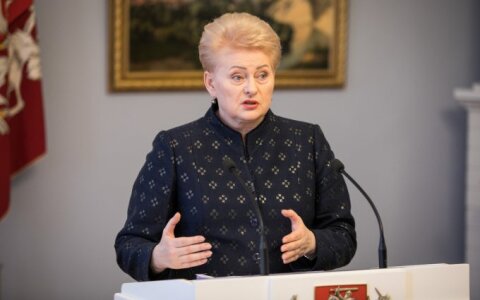 The development of the European Semester, employment and social affairs, as well as Lithuania‘s priorities for the multiannual financial framework were discussed at the meeting.

According to the President, the latest assessment of Lithuania‘s progress showed that the economy grew by 3.6 percent, investments increased and employment went down over the past year. Income inequality and social exclusion however remains problematic and among the highest in the EU, therefore more decisive reforms are needed in those areas.

In the President’s view, implementation of reforms requires financial resources and the Commission‘s proposal to cut cohesion funding to Lithuania by a quarter in the future multiannual financial framework is disproportionate and too sudden. Regional disparities are still showing, and migration has a negative statistical impact on the development level of our country.

The proposal to cut funding to Lithuania from the European Social Fund (ESF) by 20 percent will have a particularly adverse effect on the implementation of social projects. Lithuania was allocated approx. 1.15 billion Eur from the ESF in the period of 2014–2020, most of those funds were used for the promotion of quality employment, social inclusion, and fight against poverty.

The President highlighted that Lithuania aims to avoid such drastic cuts and ensure adequate funding of the country‘s needs.

The President and the Commissioner also discussed other key aspects of the Commission‘s country-specific report and exchanged views on the measures proposed by the Commission for citizens‘ social rights.