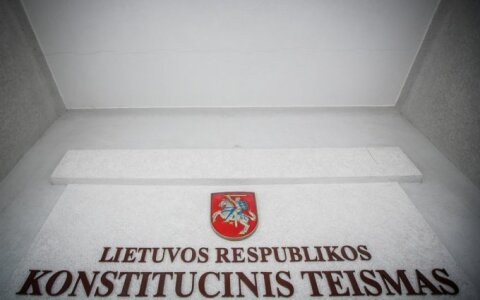 The Lithuanian Constitutional Court ruled on Thursday that criminal intelligence data can be used in investigating misconduct in office by public officials.

According to the court, the legislation on the use of intelligence data in such official probes does not run counter to the provisions of the Constitution regarding the protection of the private life of a person or the right to enter on equal terms the state service.

The case was referred to the Constitutional Court by administrative courts examining the circumstances of dismissal of Dainoras Bradauskas as head of the State Tax Inspectorate and sacking of a police officer in Klaipeda.

"A situation where a person who, based on lawfully collected information available to the state, does not comply with the requirements of loyalty to the state and transparency is employed in the state service cannot be tolerated under the Constitution," he added.

Bradauskas lost his job in 2017 because of his conversations with Raimondas Kurlianskis, who at that time held the post of vice-president at MG Baltic, one of the country's biggest business groups.

Their conversations were recorded by means of criminal intelligence as part of an anti-corruption investigation involving Kurlianskis.

Based on these conversations, a Finance Ministry commission ruled that Bradauskas had discredited his office by creating exceptional conditions for a particular taxpayer.