Cartography of a private domain: the 1645 map of the Duchy of Biržai 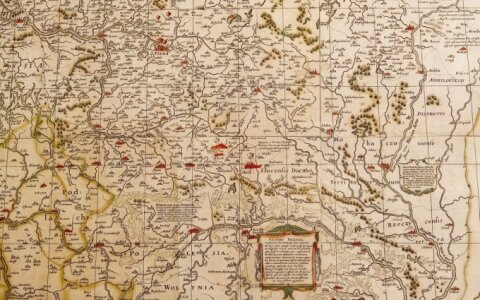 European cartography experienced a considerable rise in the 16th and the first half of the 17th century when maps became a practical necessity. Their importance rose in Lithuania too as people required more precise pictures of different localities due to intensifying economic ties with Europe, military conflicts and local land and administrative reforms. This is how the view of southern Lithuania emerged in 1559 according to the description of forests by Grigalius Valavičius.

During the Livonian War Road maps were drawn and Mikalojus Kristupas Radvila Našlaitėlis unveiled his cartographic work in 1613. There is no coincidence that the State Office of the Military Architect was established in the late 16th century to conduct topographic surveys of castles and other strategically important territories. The development of cartography was spurred by the emergence of first maps in 1613 and the cartographic plans of local territories of the first half of the 17th century can serve as evidence of that process.

Related articles
Self-rule in GDL Biržai
Maps of the GDL lands: the mirrors of territories

The map of the Duchy of Biržai (1547–1811) drawn in 1645 by Juzefas Naronovičius-Naronskis (Polish: Józef Naronowicz - Naroński), the geometer of the Radvila ducal court, is one of such examples as it reflects the high level of cartography in the Grand Duchy of Lithuania at that time. The Duchy of Biržai was a large private domain that existed longer than any other private territory in the GDL and the map of the domain was Naronovičius-Naronskis' most important work in Lithuania.

The versatile talent of Naronovičius-Naronskis: scientific works and their illustrations

Juzefas Naronovičius-Naronskis (ca. 1610–1678) became famous for his various cartographic endeavours. He was born in Lithuania (perhaps in Kėdainiai) and most probably received university education before starting working as an inspector and geometer for the court of the Radvila family, the dukes of Biržai and Dubingiai, where he stayed for more than 20 years, from the 1620s or 1630s to 1658. It was before 1654 that he drew the plans of private lands in Svėdasai, Lubcha, Jašiūnai, Delyatichi, Vyžuonos, Alunta, Kėdainiai, Raudondvaris and Panemunė as well as the map of the Duchy of Biržai.

Historians guess that he took part in the drawing of the map of Ukraine by Guillaume Le Vasseur de Beauplan in 1639–1640 and in the preparation of the map of Podlachia by Daniel Zwicker in 1646. Juzefas Naronovičius-Naronskis was both a practitioner and a theoretician. Between 1655 and 1659, he wrote in Polish Księgi nauk matematycznych (Books of Mathematic Sciences), its three parts dedicated to arithmetic, geometry and optics and was illustrated with numerous drawings of his own. Only several fragments of the latter two parts have survived until now.

The second volume dedicated to geometry is sometimes considered the first cartography textbook in Lithuania and Poland. The author offered the cartographical and topographical terminology in Polish and described measuring equipment in that book. The volume dedicated to optics features a work on fortification based on the European studies in the field. That article stands out as one of the most important papers analysing the building and construction of bastion-type castles. Juzefas Naronovičius-Naronskis continued his cartographic work in Prussia after 1658 where he prepared plans and drawings of castles in Konigsberg, Klaipėda and other cities.

What did the 17th-century map reveal?

The map of the Duchy of Biržai prepared by Naronovičius-Naronskis in 1645 is a cartographic work of high technical and artistic standards. The map is fairly large (740 x 590 mm), painted in colours (light brown and light yellow), with green patterns marking woods and red ones for private lands. The map clearly distinguishes the limits of the Duchy of Biržai and marks with a dotted line the administrative border between the district of Upytė and the Duchy of Courland in the northern part of the Duchy of Biržai. Due to the unconventional orientation of the view – which has been rotated by 120 degrees – Samogitia appears in the north, while Courland and Semigallia are in the south and in the east respectively.

The author has decorated the margins of the map with his own drawings. The coat of arms of the Radvila extended family of Biržai and Dubingiai rests in the upper left corner surrounded by weapons and construction tools. A pair of low-rank noble landowners (žemionys) is depicted in the upper right corner, while two horseback men and a Tatar between them appear on the side of the map. At the bottom of the map Naronovičius-Naronskis drew several infantrymen and a burgher of the Duchy of Biržai. This unique iconographic material offers a glimpse at the representatives of local social groups of the time.

Officially, Naronovičius-Naronskis was both a geometer and an inspector of the Radvila court. The latter job most probably enabled him to use the data from property inventories while working on his map. He scaled down the drawings of separate localities before transferring them onto the map. He employed rope measuring for small distances and the basic technique of triangulation for large areas which helped him achieve a high level of precision and detail. The map shows all towns of the duchy and their plans very precisely.

To depict settlements, the author of the map applied perspective marking and panoramic pictures, the methods common in the 17th century. City plans clearly show networks of streets with churches and defensive fortifications. The map was intended to help the Radvilas use their domain in a more rational way, therefore it features very detailed and precise plans of possessions of different types and sizes including towns, villages, manors and demesnes owned by žemionys. In terms of size, demesnes range from two to 106 volokas (from around 40 to over 2200 hectares).

The map also shows the borders of the administrative units of the duchy: the domains of Biržai, Papilys, Salamiestis, Nemunėlio Radviliškis, and Saločiai. The map even shows the menagerie, the mill, several inns and the brickyard that belonged to the Radvila family from Biržai.

This map is a unique piece of work because it is so detailed, so comprehensive and so precise in revealing the situation in the particular locality in the middle of the 17th century. No other map of this kind has survived. The fate of the 1645 map of the Duchy of Biržai also remained unclear for many years despite numerous references to the map in historical sources. Traces of the map vanished in the early 20th century and historians thought the map had not survived until it was returned to Biržai in 1993. Karolis Radvila, the Ambassador of the Order of Malta in Argentina and the last owner of the map, handed it over to Lithuania.

It took one year to restore the map at the Pranas Gudynas Centre for Restoration and then the map was returned to the Sėla Museum in Biržai at the former palace of the Radvila family. The map, displayed in the main hall of the palace, is one of the most valuable items in the museum. The map was included in the UNESCO's Memory of the World national register of Lithuania in 2009 as an object of documental heritage of regional importance.