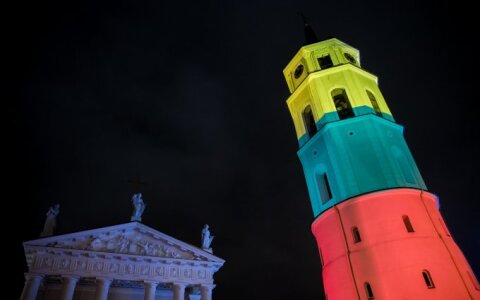 On 11 March, Vilnius city dwellers and city guests will follow the Roads of Freedom in Vilnius. Everyone is invited to the march at which a 400 metre long Lithuania’s flag will be carried and to take free of charge tours around the Old Town. The tours will be given in a number of different languages by almost forty guides. Excellent news to everybody: public transport will take passengers to the festive events of 11 March free of charge as well, a press release from Vilnius city municipality states.

"I congratulate everyone on the Day of Restoration of Lithuania's Independence and cordially urge everyone to be proud of our Freedom and of our free city. We will celebrate the 29th Day of Restoration of Lithuania's Independence in a memorable and joyful way. Let's go out to Vilnius' streets and flood them with the sea of our national flags. Let's not forget that our hard-won Freedom is the result of our nation's unity," Vilnius mayor Remigijus Šimašius says.

The celebration will start at noon with the flag raising ceremony during which the flags of the three Baltic countries will be hoisted in the Independence Square. Those who will come will see Lithuania's Honour Guard soldiers and the Lithuanian Armed Forces Orchestra. Vilnius city dwellers and city guests are invited to join the march along Gediminas Avenue from the Independence Square to the Cathedral Square and march together with the riflemen and scouts helping them carry Lithuania's flag which will be as long as 400 metres.

After the march, at 1 p.m., those, who have registered for tours in advance, will be invited to the Cathedral Square to join the 38 tours. A few tens of guides will be waiting for the city dwellers and city guests near the monument of Gediminas. They will give 1.5–2 hour long tours by foot around the most beautiful places of the old Vilnius free of charge. In this way, the 11th of March will provide everyone with a perfect opportunity to expand their knowledge, enjoy the beloved city, the Freedom, and to memorise the unique history of Lithuania's capital. Registration to the tours will be announced on 6 March.

Traditionally, on 11 March, at 2 p.m., the Town Hall will host the Little St. Christopher awards ceremony which will be held for the fourth year. It was decided to establish this award in order to honour the youngest Vilnius city dwellers for their merits in the areas of science, culture and art, sports, and volunteering. As many as 11 awards will be handed out, mostly to those young people who were distinguished in the spheres of culture and art.

As numerous celebratory events will be offered to the city dwellers and guests on 11 March, everyone is encouraged to take public transport for free.

"The Day of Restoration of Lithuania's Independence in Vilnius will, as always, offer a number of events. As the weather will hopefully get warmer, the celebrating city will be full of people – both local residents and city guests. Just like on any other national holiday, nobody wants to waste their time in traffic congestions and while looking for parking spaces. We would also like everyone to stay cheerful. For this reason, we invite everyone to use public transport free of charge all day long", Modesta Gusarovienė, director of the state enterprise Susisiekimo Paslaugos, said.