Two plus two is not necessarily four: German policy towards the Visegrád countries 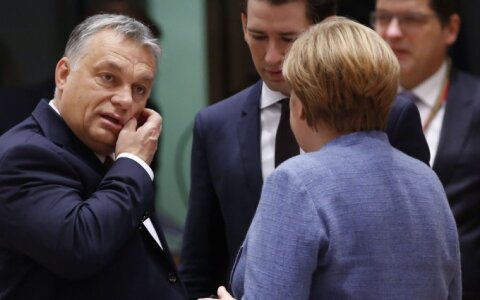 Until 2015, very few people had heard of the term “Visegrád Group” in Germany, let alone had a sense about its purpose. At that time the group – also called “V4” after its four member states Poland, the Czech Republic, Slovakia and Hungary – saw its main task in the coordination and exchange of information, national positions, as well as cooperation on „soft“ projects such as infrastructure.

For Germany, the Visegrád countries, with a combined population of around 65 million people, not only constitute important partners on its Eastern border, but together these countries generate a trade volume which is 50 percent higher than Germany's largest trading partner, China. Nevertheless, among foreign policy and economic experts it was a common view that the format was outdated, because its original purpose – mutual assistance on the path of post-communist transformation towards EU and NATO membership – had long been fulfilled. Yet, the beginning of the refugee crisis in 2015 reinvigorated the V4, particularly in their tough stance against German chancellor Angela Merkel's refugee policy.

Related articles
Lithuania and Germany: a relationship that is better than ever before
The Baltics in an era of transatlantic turbulence

This took many German decision-makers by surprise. The Central European countries had been among Berlin's most reliable allies during the preceding Euro crisis and suddenly it seemed as if a group of four had joined forces in order to undermine the chancellor's efforts for a common European approach to solving the refugee crisis. The notion of Visegrád as a coherent "anti-German bloc" has thus been stuck in the mind of many and has been seen to be underscored when, in late 2017, the leading Austrian right-wing populist Heinz-Christian Strache called for his country to join the group for that precise reason. Of course, neither the Visegrád Group nor any of its member states have an a priori anti-German orientation. Quite the contrary: The relations between Germany and its Eastern neighbours are deep, multifold and based on shared history, cultural, and social ties as well as economic and security interests. In 2015, all V4 states saw Germany as their single most important partner in the European Union (EU) and felt that the Czech Republic, Hungary, Poland, and Slovakia were key partners for Berlin as well. Even though the sense of shared values – which is the basis and the condition for mutual trust and understanding – was shaken when the governments revealed some considerably different interpretations of these values in the autumn of 2015, steps have been taken to restore the lost trust. In fact, over the course of the last three years, Germany and the EU have certainly moved in the direction of the demands of the V4 countries. There is a fundamental change in both the tone and the main objectives of European migration policy. The protection of external borders and cooperation with third countries are now at the forefront of efforts. Furthermore, the plan to impose a compulsory resettlement of refugees has pretty much fallen by the wayside.

The question of whether Germany will continue to cooperate with the V4 countries collectively, as well as in what ways, strongly depends on how the format will define its common policies. Shared views and goals exist on a number of issues between Berlin and the V4. First, in terms of Brexit, the question of preserving the unity of the European project in the EU-27 format is one of the most important common interests nowadays. Despite London's attempts to weaken the common European stance – particularly by approaching the Central European countries which have a considerable number of their citizens living in the United Kingdom (UK) – Germany, the Visegrád countries and the other EU member states have so far resisted British enticements. Second, regarding European monetary policy, Germany can be seen to tentatively accept the French view that there is a need for improving the monetary union and it acknowledges that sometimes a project should be initiated without the consultation of all member states. Still, Berlin is rather reluctant in this respect, a position more in line with the view of the V4, of which only Slovakia is a member of the Euro zone. Third, whilst France has shown increased interest in recent years in the concepts of a "multi-speed Europe," or another types of "transformation" of the Union in order to promote European integration, Germany prefers the consolidation of the Union as a whole. A good example of this is the Permanent Structured Cooperation (PESCO) in the area of defence and security. Germany wanted it to be "inclusive" – which is what eventually happened, trumping the French wish for more "effective" defence cooperation (which would have probably meant that less member states participate in it). This aversion to the idea of a multi-speed EU -- which could marginalise the member states in Eastern and Central Europe -- is shared by both Germany and the V4 countries. There are many other areas of European policies where Germany and its Eastern neighbours share common ground. Although there are some differences of opinion (e.g. on the so-called Posting of Workers Directive), it seems that Germany and the V4 countries have similar approaches for the strengthening of the internal market, due to many shared economic interests. Moreover, in terms of the EU's neighbourhood policy, Germany and the Visegrád states have a common interest in ensuring that the EU does not forget and lose sight of the countries that lie further East.

These topics help offer scope for the active cooperation and mutual interests between Germany and the V4 – albeit not limited to them alone. Yet, it has to be acknowledged that priorities and interests within the Visegrád Group, beyond these shared interests -- and the common rejection of the German handling of the migration crisis -- are quite diverse. Indeed, the Visegrád Group is not a monolith; not a unified bloc. Whilst history and geography helped create the strong bonds between these four countries, history and geography can also be seen to separate them. The consequences are changing constellations: There are often not "the" V4, but sometimes V2 plus 2 or V4 minus x. The different and changing political colours of the incumbent governments can pose a further obstacle towards the V4's internal coherence. These practical and ideological reasons contribute to the fact that especially the smaller Visegrád countries often prefer bilateral relations with Berlin over a "channelled" common approach on most issues.

This becomes very much apparent in the relations with Russia and the perception of threats originating from Putin's policies towards Eastern Europe and the EU. A prime example of this is with the views on the North Stream 2 gas pipeline project, running through the Baltic Sea from Russia to Germany. On the one hand, and similar to the Baltic States, Poland and Slovakia are strictly against the project, sometimes even comparing it to the infamous 1939 Nazi-Soviet Molotov–Ribbentrop Pact. The reasons for their rejection are manifold, yet they primarily revolve around the fear of being cut off from the energy supply, a deeply entrenched historic anxiety of being „surrounded" by a German-Russian alliance, as well as the impact this would have on the stability of neighbouring Ukraine. On the other hand, Hungary and the Czech Republic have a more nuanced view on North Stream 2. While they certainly also hold some reservations, in general they are not in total opposition to the pipeline. Additionally, Hungarian and Polish foreign policy arguments (e.g. the impact on Ukraine) are far less important than as seen, for example, in the case of Poland. This reflects an overall more „pragmatic" course towards Russia – such that the Czech president has even stated admiration for Russia's leadership – a source of harsh criticism from the other V4 governments. In this sense, the V4 indeed do not act as a unified block, but within their individual national interests.

Germany's stance towards Russia can be called „ambiguous" as well. On the one hand, there are long and deep historical, social and economic ties between the two countries. This is why Germany, more than France or other Western European countries, considers itself in a position to stay connected with Russia and maintain dialogue, even in difficult political times. On the other hand, since the chancellorship of Konrad Adenauer (the first German chancellor after the Second World War), Germany has firmly positioned itself as a Western liberal democracy with a strong respect for democracy, human rights and the rule of law. Thus, Moscow's actions in recent years, not least the illegal annexation of Crimea and the occupation of parts of Eastern Ukraine and the continuous support for the separatists involved, have resulted in Germany being one of the strongest advocates of imposing and continuing a strict sanctions regime against Russia. Looking at North Stream 2, this reflects the ambiguous German policy towards Russia. Legally and financially, this project is a purely private venture. Yet, more recently the German government has openly stated that the reservations of Central and Eastern European countries are listened to and that the continuation of gas transit via Ukraine is a prerequisite for operating North Stream 2.

As a result, V4 cooperation amongst each other and vis-à-vis Germany can be described as quite diverse. Among the four member states, the Visegrád format enables regional integration in fields like infrastructure, cultural exchange, tourism, or mutual assistance with the implementation of EU's environmental goals. This corresponds to the original purpose of the V4 and will be welcomed by Germany for its stabilising effect on the region. The V4 will also play a role where its members see a need to develop some kind of counterweight – be it against a perceived "Western" or "German" dominance. This will mostly be the case regarding energy relations (North Stream 2) and the question how to "share" European solidarity towards (Muslim) refugees. In these fields it will be important for Berlin to continue (and extend) the dialogue with the V4 countries wherever possible. This could include, for example, joint meetings of the Weimar Triangle and the V4 countries, as has been suggested. This dialogue will not necessarily dissolve concrete conflicts of interest. But it will certainly help to avoid misunderstandings and to keep in mind that Germany and East-Central Europe have much more in common than what sets them apart.

Tobias Rüttershoff is the desk officer for Central and Eastern Europe at the Konrad-Adenauer-Stiftung (KAS) in Berlin. Previously he was a programme manager in the domestic programmes team of KAS. He studied Political Science, Public Law and International Relations in Mannheim, Maastricht and Sheffield before earning his doctorate in Strategy and Security at the University of Exeter. During his studies, he gained practical work experience in the German Bundestag, the Leadership Development and Civic Education Center of the German Armed Forces and as a research assistant at Oxford University.

The article was published in the most recent edition of Lithuanian Foreign Policy Review, an annual magazine by Eastern Europe studies center in Vilnius, Lithuania. Access to the full publication - http://www.eesc.lt/uploads/Lithuanian%20Foreign%20Policy%20Review%202018.pdf

Two plus two is not necessarily four: German policy towards the Visegrád countries