Lithuania’s membership in the OECD: benefits are already here* 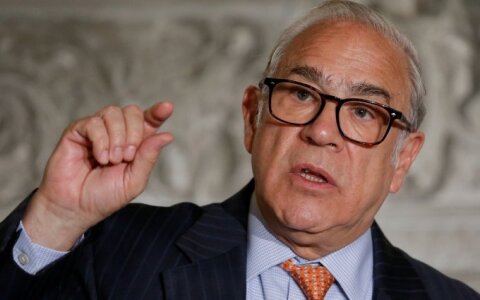 On 5 July 2018, Lithuania officially became the 36th member of the Organisation for Economic Co-operation and Development (OECD). It was symbolic that at the time when Lithuania deposited its instrument of ratification of the accession with the French government, the depository of the OECD Convention, OECD Secretary-General Angel Gurría was on a mission to Vilnius.

The official start of Lithuania's membership in the 'house of best practices'[1] deliberately coincided with Secretary-General's meetings with the President of the Republic of Lithuania Dalia Grybauskaitė, Prime Minister Saulius Skvernelis and his Cabinet of Ministers. Symbolically, Mr Gurría was bestowed a state award for his personal support for Lithuania's membership in the OECD. However, the official purpose of the Secretary General's visit was to present the 2018 OECD Economic Survey of Lithuania and the related recommendations.

The Economic Survey was the Organisation's final review of Lithuania's economy approved by the OECD Economic Development and Review Committee. It was the last of 21 OECD committees that separately evaluated Lithuania throughout the entire accession process. Since the opening of the accession negotiations in April 2015 we knew full well that should any of the committees have found our readiness to implement the OECD legal instruments insufficient, the country's goal of joining the Organisation in 2018 would have to be postponed. Some participants have therefore reasonably presented the completion of the accession process 'in record time'[2] of three years as an additional achievement. And there were reasons to celebrate. For instance, for the first time in the history of the OECD Investment Committee, its members gave a positive assessment of Lithuania's readiness for OECD membership already during the first airing already[3].

Despite the fact that Lithuania finished its accession negotiations relatively quickly, our path to full OECD membership was rather long. Its beginning could be traced back even to the early years of Lithuania's restored independence, when in 1996 the three Baltic States – Lithuania, Latvia, and Estonia – signed a joint declaration stating their intention to join the OECD. Lithuania reinstated its intention separately in 2002 and renewed the membership application in 2012. It is symbolic that against the background of celebrating the centennial of Lithuania's restored state in 2018, the country's highest officials have frequently stated that this step 'finalized' Lithuania's accession to important international organizations.

So, why did Lithuania aspire to join the OECD, and what insights can we share regarding the lessons learned from the accession process?

What are the benefits?

The OECD defines itself as a 'go to' organisation leading efforts on economic growth, global competitiveness, social well-being and good governance'[4]. It is also often seen as the 'house of best practices'[5]. Through its unique way of working – encompassing data collection, analysis, discussion, decisions, implementation and, most importantly, peer reviews and multilateral surveillance on member states' performance – it provides a forum for governments to address challenges that are often common to all of them. As we have already experienced in Lithuania, being part of the OECD allows its members to use the Organisation's vast expertise and advice to support policy-making at home, as well as quickly learn from the relevant experiences of others. Membership also brings an opportunity to participate in setting new multilateral standards to be later adopted by both its members and the wider international community. For example, Lithuania's experience in regulatory enforcement and inspections has been recently used for the creation of a related OECD toolkit for its members.

Besides additional benefits, like the recognition of a country's achievements, bigger visibility in international arena and a certain 'seal of approval' for international investors (as has been seen in the case of Lithuania), one should highlight the benefits brought by the very process of accession. With a view to implementing the OECD legal instruments, Lithuania revised more than 200 legal acts, including amendments to approximately 50 laws. Major legislative reforms, such as overhauling of the governance of state-owned enterprises (SOEs), strengthening of anti-corruption measures, and improving the investment environment have all been often mentioned by the OECD itself[6]. In particular, it could be reasonably argued that the objective of joining the OECD in 2018 was the key factor behind the major reform of the country's corporate governance framework in general and its SOEs, more specifically.

To illustrate the latter fact, numbers speak for themselves. At the end of 2015, Lithuania had 128 SOEs, yet we have started 2018 with 66. External observers had been deeply surprised that relatively small Lithuania had 42 state forestry enterprises and 11 road maintenance companies. Even more surprising was the fact that the exact number of forestry SOEs was defined by law. In fact, the resistance to reforming the 'rules of the game' in the latter sector was so intense that the Seimas' (Parliament's) vote on removing the related provisions from the Law on Forests challenged the stability of the Government. Nevertheless, all the forestry (plus the State Forest Management Institute) and road maintenance enterprises have been recently merged into two SOEs.

Similarly, Lithuania implemented significant steps in depoliticising the management of SOEs: while at the end of 2015 we had 63 members of political confidence sitting on their boards, in the beginning of 2018 there were none. In the same period the number of independent board members increased from 44 to 108. Besides further strengthening of the independence of boards, the Government continues to implement an ambitious plan that will further reduce the number of SOEs. This plan will streamline their legal and corporate forms, as well as strengthen the state ownership function, with particular emphasis on formulating objectives for SOEs and monitoring their performance.

Lessons from the accession process

When meeting delegations from OECD aspiring members, Lithuania's officials are often asked for advice on the accession process. I would distinguish three general lessons that may be useful both for future members of the Organisation and Lithuania's Government in implementing further reforms.

First, one of the key factors of Lithuania's success in the accession process and relatively short negotiations was strong political consensus. This meant that all the necessary legislative changes in the Seimas and the Government were prioritised and subordinated to the final goal of joining the OECD.

As a matter of fact, Lithuania's ambition of finishing the accession process already by mid-2018 was met with initial scepticism, including at the Headquarter of the OECD. Some OECD experts also found it hard to believe that our plans of implementing the Organisation's recommendations in a relatively short period of time were real. An illustrative case that has surprised many at the OECD is the Republic of Lithuania's Law on Companies, of which significant amendments were passed in the Seimas in less than three months after receiving additional related OECD recommendations (including drafting amendments, consulting the business community and assessing the amendments by Parliamentary committees).

Given the fact that Lithuania declared its intention to join the Organisation as early as in 2002, it could be argued that had the political consensus emerged earlier, membership could have been achieved much earlier too. Nevertheless, even against the background of political consensus, one should not underestimate the leadership and personal effort of the highest officials, which in fact were essential for reaching the goal.

Second, our experience demonstrates that it is essential to ensure good coordination between different institutions' work in order to ensure continuity and to speak with one voice. In Lithuania, the main coordinating body of the entire accession process was the Ministry of Foreign Affairs, which created a network of responsible officials in other institutions and regularly updated the Government. The importance of continuity and speaking with one voice could be well illustrated by the fact that during the accession process, the OECD Corporate Governance Committee worked with four different vice-ministers, all responsible for meeting the related OECD standards. Moreover, frequent political changes at the Government and the Ministry of Economy coincided with unexpected changes of other responsible senior officials. It is therefore reasonable to argue that high turnover of staff at the Ministry of Economy – the main counterpart of the Committee – could have prolonged the Committee's assessment.

Third, a country's path to OECD membership is easier when there is political willingness to use the accession process as an opportunity to undertake important policy reforms. In the case of Lithuania, the necessity of implementing OECD legal instruments were often used as an additional argument to support political decisions.

This latter tendency well resembles Lithuania's accession to the EU in 2004, which helped to implement significant reforms to the country's policies, legal system and institutions. As a result, even before the start of negotiations with the OECD, Lithuania had already met a big number of membership requirements. Paradoxically, in certain policy areas that do not fall under the remit of the EU, such as the governance of SOEs, Lithuania had to implement significant changes. In this light, both accession processes – both to the EU and the OECD – could be seen as complementary.

What is the OECD membership about?

In the concluding remarks at the final committee-level meeting before the OECD members were to decide on Lithuania's membership, I was privileged to share my personal experience of the changes Lithuania had undergone.

While at the start of negotiations the objective of achieving OECD membership was often used as the key motivating factor for necessary reforms ('we have to do this because the OECD requires'), at the doorstep of entering the club, one could hear a growing number of deliberations about what OECD practices Lithuania could use to improve our policies. This was experienced both in the Government and in meetings of Parliamentary committees. At the same time the fact that in certain policy areas – for instance in regulatory policy – the OECD identified Lithuania's practices as a good example to follow for its existing members, encouraged us to think how Lithuania would enrich the Organisation. To my understanding, the OECD is well-known notably for all of this: sharing your best practices to help other members improve their policies and learning from the best of others to improve yours.

[2] OECD (2018b) Remarks by Angel Gurría during the launch of the OECD 2018 Economic Survey of Lithuania, Vilnius, 5 July. Available from: http://www.oecd.org/about/secretary-general/launch-of-oecd-2018-economic-survey-of-lithuania-july-2018.htm [Accessed 15 September 2018].

[3] Ministry of Foreign Affairs of the Republic of Lithuania (2018) Lithuania – one more step closer to becoming an OECD member. March 30. Available from: https://www.urm.lt/default/en/news/lithuaniaone-more-step-closer-to-becoming-an-oecd-member [Accessed 30 September 2018].

Lithuania’s membership in the OECD: benefits are already here*