The forgotten case of Ukraine 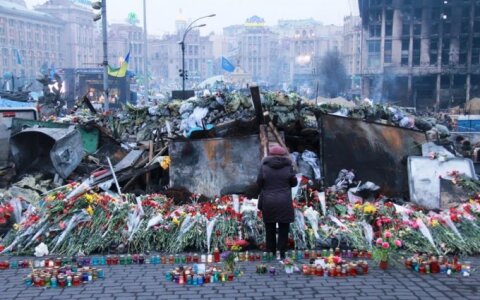 Something happened on the 5th of January. Between worries about Brexit matters, the usual Trump business and other terrible matters, something changed on that day. Two days before Christian Orthodox Christmas, Ecumenical Patriarch Bartholomew I of Constantinople signed the tomos of autocephaly for the newly created Orthodox Church of Ukraine. This was not only a step toward the independence of Ukrainian Orthodox believers, but all of Ukraine.

I had the opportunity to be present in Kyiv on this momentous day and even if the signing happened a thousand kilometres away, I expected to see some sign of what was proceeding. Granted, I was on holiday and was not actively seeking such things during my time out and about the city, but neither the city's atmosphere, nor any events in it indicated anything real changed. As it happens, I even visited the Kiyv-Pechersk Lavra Monastery, which currently is essentially the seat of the Russian Orthodox Church in Ukraine and... Nothing. The complex itself was beautiful, it was snowing quite hard and numerous people were gathered either for prayer or similarly to me – sightseeing. And yet, at the heart of Russia's tendril into Ukraine, there was also no sense of this change having happened.

Related articles
Identifying the biggest threats to the country, wanting to both punish and be friends
Ukrainians become the largest foreign community in Lithuania

As my trip in Ukraine progressed, I would occasionally wonder to myself, why such a profound change would pass by seemingly without major celebration or incident. My conclusions were twofold. On one hand, this changes little for the residents of Kyiv, as well as many Orthodox believers across the country. The big change lies in parishes that now have to or had to make the decision of whom they wish to stand by – the Russian or the Ukrainian Church.

But on the other hand, I came to realise that this was simply a consequence. A result of the momentum gained through the events Maidan and the events of 2014. As my host and good friend in Ukraine put it, Ukraine only truly obtained independence then, not in the 1990s. What I expected to see and to feel had already been subsumed by the country's jolt toward the West.

And while I may not have seen much of a mark made by the religious change, the political and social one was rather more profound. I won't describe myself as well travelled, but I've had the opportunity to see a number of European capitals, both in the West and the East. Bar national celebrations, I do not think any of them featured as many national motifs, flags and colours as Kyiv did during my visit. This is all of course just the capital I am talking of, things differ city to city, region to region, but the best full reflection you can hope to have of a country is likely to be found in the capital.

The atmosphere itself as well. Ukrainians themselves may be too accustomed to it by now, but it feels like the country itself breathes and you can sense this breath in just about everything and everywhere. I am Ukraine. We are Ukraine. The concepts of nationalism and patriotism have been tarnished over time by those taking such ideas by far to the extreme so let me put it this way – I may not have been there to witness the events and atmosphere of the Sąjūdis movement in Lithuania, but I think this is as close as one can get in this day and age. And it is something of a miracle. In a day and age where democracy is actually contracting and losing footing in some places, there is a spark right next to one of the countries arguably most related to the challenges the ideology faces.

And yet. Just as much of a miracle as the events of Euromaidan may have been in 2014, as well as Ukraine's subsequent capacity to remain upright even as the country and people are battered from all sides, how short this miracle has managed to maintain our attention. This was particularly highlighted to me when a Lithuanian friend asked upon my return. "I did not take interest in it and heard nothing about the East, what's happening there?" he asked.

This is an educated, intelligent individual, who is not apathetic to political happenings and goings on. And so it struck me. Ukraine has actually been forgotten already. Fair enough, there are various initiatives such as the so-called Marshal Plan for Ukraine or the recent visit of Baltic foreign ministers to Mariupol and some still maintain interest, but it's such a niche audience. Think back to the beginning of the conflict in Ukraine, the coverage and discussion revolving around it then. Now think about the events recently at Kerch Peninsula, something that has even been described as piracy, with Russian vessels capturing Ukrainian ships in the area. The conflict continues, even if perhaps a little lower intensity, but it takes yet another gigantic challenge to the international rule of law to bring our gaze back.

Just as many other democratic revolutions, uprisings, changes of power or whatever else you may call it have done before, the one in Ukraine likely brought big expectations. And yet, international attention is very much wavering, Nord Stream 2 forges ahead unabated and will likely be constructed and Ukraine is beset by problems stemming from decades, even centuries of misrule from the East, with only a handful of years since the events in Maidan to attempt to right the country's course. How long can the optimism and momentum the country gained in 2014 last?

Ukraine's history in the past odd century has been punctuated by things being forgotten. Be it how World War 1 rolled over the country and yet is never really brought up because of Soviet-era worship of the Great Patriotic War. Be it the famines, particularly the case of Holodomor, a Soviet-manufactured famine, which killed millions. Be it efforts to erase the distinction of there existing a standalone Ukrainian nation. The Soviet Union sought to erase many countries and nations, but given the cultural, religious and social ties Russia and Ukraine have, the threat to Ukraine was perhaps among the greatest. And yet Ukraine is on the verge of being forgotten once again. Left alone in the struggle to change and enter an imperfect, but nonetheless better state of being.

Westward momentum remains in Ukraine, even if only visible to someone from abroad. I imagine that the current conditions may be rather similar to what the Baltic States experienced following their escape from the Soviet Union. To those who may not know much of the early to mid-1990s in our region, let me just tell you this – it was a challenging period and at least for Lithuania it included a time of economic blockade on a country that had just regained independence and had scarcely begun rediscovering itself. Back then, no one would have thought of the three small Baltic countries ever being NATO or EU members.

These are all reasons why Ukraine needs our help more than ever. In continuing to pay attention and maintain interest at the very least. Democracy feeds on people's enthusiasm, on their desire to build a better community. This enthusiasm is occasionally flagging among EU members and other Western powers, so perhaps we need Ukraine no less than they do us. At least while it lasts under duress from the East, perhaps we can be reminded of what it is that actually makes democracy great.

The forgotten case of Ukraine