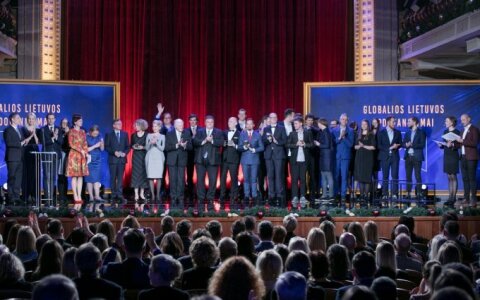 On December 27, the Global Lithuania Awards 2018 ceremony was held at the National Philharmonic. 400 guests from tens of countries gathered to honour international Lithuanians and foreign professionals related to Lithuania, who have contributed to the growth of our country through their knowledge, connections, investments and other initiatives.

The Global Lithuania Awards were held for the seventh time by the international network Global Lithuanian Leaders, which is a gathering of more than 1700 Lithuanian professionals in 56 countries around the world. This year, 24 individuals from the USA, Israel, Canada, China, the UAE, Estonia, UK and Lithuania were nominated in six categories.

The award for investment brought to Lithuania went to Einaras von Gravrock, the co-founder of the US-Lithuanian company CUJO AI. The company creates AI-driven software solutions and this year, drew investment from the US telecommunications giant Charter Communications, also recently being recognised at the Year Glotel Awards 2018.

The award for international innovations implemented in Lithuania went to Toronto University scientist, dr. Artūras Petronis. The Canadian Lithuanian has worked together with Lithuanian scientists for two decades and last year, implemented the parallel lab idea at the VU Natural Sciences Centre, which brought together the Toronto University and Vilnius University Life Sciences Centre scientists in the newly created VU GMC Epigenomic Research Lab. The award was presented by board member of one of the Global Lithuania Awards supporters Euroapotheca, Aurimas Martišauskas.

The award for creation of business links went to Povilas Gudžius, the founder and president of the Lithuanian Business Association in Dubai, Bloomberg fintech service sales head. This year, Povilas actively contributed to the Lithuanian President Dalia Grybauskaitė and Lithuanian business delegation's visit to the UAE, organised a visit by UAE business representatives to Lithuania. The nomination was presented by business law bureau TRINITI representative Vilija Viešūnaitė.

The award for international experience for Lithuania's regions went to Eivanas Maksvytis, who returned to Šilutė after long years of working in Sweden and created the innovation and robotics centre Tavo Robotas in the local gymnasium. Over its first year, this initiative drew much support and more than 50 children and students took interest in creating robots, expansion to other cities is being planned. This category was presented by Alliance for Recruitment representative Agnė Kuodė.

The award for heralding Lithuania's name was selected in the lrt.lt news portal. From eight exceptional stories, its readers voted for Jokūbas Laukaitis and Vytautas Jašauskas. Their video for Lithuania's centenary of independence gathered numerous views. The award was presented by LRT director general Monika Garbačiauskaitė-Budrienė.

The lifetime achievement award traditionally awarded by the Lithuanian Ministry of Foreign Affairs and presented by minister Linas Linkevičius is headed to the USA this year. The Lithuanian department of the Voice of America is awarded for its many years of work. Even during the hardest years of Soviet occupation, the radio, founded by the efforts of US Lithuanians and the US government was a beacon of light, which reached the Lithuanian people trapped behind the Iron Curtain and connected them to their compatriots scattered across the world. It helped fight and gave hope that Lithuania will one day be free again. The award was received by Voice of America editor Virginija Vengrienė, who also hosted its last show in 2004. It is symbolic that this and other centenary Global Lithuania Awards were presented by Lithuanian President Valdas Adamkus.

The annual Global Lithuania Awards seek to highlight and present to the public important accomplishments of global Lithuanians. The awards honour international professionals, who associate themselves with Lithuania, who through their talent and work open global opportunities and perspectives for Lithuania. This year's award partners were Euroapotheca, the Lithuanian Ministry of Foreign Affairs, LRT, business law legal firm TRINITI and personnel search company Alliance for Recruitment.