(1)
Ludo Segers - The Lithuanian Tribune with contributions by Cliodhna Noonan 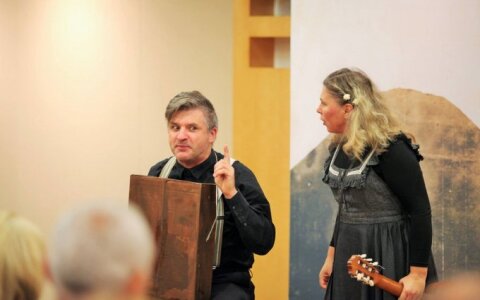 The independent theatre company “Teatriukas” from Vilnius is touring the USA in September and October. They are performing a contemporary version of Žalia Gyva in Lithuanian schools and communities to celebrate the one hundred years of Lithuanian Independence together with the members of the Lithuanian Diaspora.

Žalia Gyva is based on an old children’s game and was played in the post-war era by children in Vilnius and its surroundings. During the game, a child shouts "zalia gyva" and their friends must show a green leaf, a flower blossom or something similar, close to their body. It must have been a daunting task in the winter!

Directed by Agnė Sunklodaitė and performed by two Vilnius based actors, Dalia Mikoliūnaitė and Žilvinas Ramanauskas, Žalia Gyva has been given a new lease on life. The “Teatriukas” team have created a contemporary script based on living memories. The characters are young inhabitants of Vilnius with diverse backgrounds and nationalities having lived in different historical times. If that sounds a bit complex, the audience is given an entertaining living history lesson.

Related articles
Papal visit to Lithuania: ten most memorable quotes
Job - A Simple Man: a Danish-Jewish musical drama based on the novel by Joseph Roth in Vilnius

The various stories turn out to be very diverse, conjuring up emotions of joy, sadness and even shocking reflecting the story of Vilnius and the whole of Lithuania itself. The theatre company succeeds in making this accessible for the entire family, as a boy flees from Germany by rail and searches for his parents; a girl lives with a little goat in the attic of the Gates of Dawn; a love story of a Jewish boy, Romeno; the trains to Siberia, and the Baltic Way. Long-term New York resident, Rasa McKean described it as "A sensitive performance about historical diversity in childhood experiences that has an effect on both children and adults."

Stage designer Giedrė Brazytė and director Agnė Sunklodaitė based the performance on photographs and literary material from G. Mareckaite’s book “Beyond and Beyond the Gates of Vilnius”. Actor Dalia Mikoliūnaitė says, "Žalia Gyva is also a lesson encouraging us to remember, to foster and to be proud of our nation." She added, "We are very happy that Lithuanian families are singing our songs in New York, New Jersey, Philadelphia, and Washington."