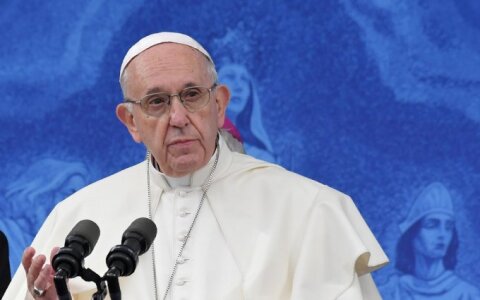 Lithuania's government hopes the upcoming papal visit will encourage religious tourism in the country as around 250 foreign journalists are coming to Lithuania to cover Pope Francis' visit.

The papal visit will be a great opportunity to promote Lithuania worldwide, says Eglė Kudzmanienė, head of the Brand Lithuania Unit of the Lithuanian government's Communication Department.

"We’ve been given an opportunity to show the country's achievements and innovativeness through the religious prism as religious services are broadcast on social media in Lithuania," she told BNS Lithuania.

The Brand Lithuania Unit has prepared information and souvenir packages for journalists coming to Lithuania and they will be taken on an excursion around Vilnius on Friday.

Majority of pilgrims from neighboring countries

Lithuania usually receives the majority of pilgrims from Poland. Representatives of the Tourism Department say the country would be able to attract more pilgrims from such countries like Spain or Italy, who spend more money on their trips, if proper religious infrastructure was developed and, for example, opportunities to spend nights at monasteries were provided.

The majority of foreigners will come to Lithuania to see the pope from Latvia, Russia and Belarus. Slightly smaller groups are expected from Germany, Italy, Poland, Ukraine, Sweden, Iceland and the United States.

Go Vilnius, the agency responsible for tourism and investment in the Lithuania capital, says around 30,000 pilgrims come to Vilnius every year.

The agency has produced a pilgrimage guide for Vilnius, which will later be distributed during international exhibitions. The guide has been translated into English, German, Polish, Italian, Russian, Go Vilnius chief Inga Romanovskienė says, and it includes key religious areas in Vilnius.

"This guide is a step in that direction and we plan to continue working in this area," she told BNS Lithuania.

Hotel occupancy rates in Vilnius during the papal visit range from 60 to 90 percent and are barely different from the same period last year.

Figures from the Lithuanian Bishops' Conference show that 90,000 invitations to meet with the pope have been distributed in Kaunas and 30,000 in Vilnius.

The pope's visit will take place on Saturday and Sunday.

Tadas Bruzgulis, a volunteer for the papal visit, told BNS Lithuania around 100,000 yellow-white souvenirs will remind of Pope Francis' visit to Lithuania. They will include jumpers, T-shirts, raincoats, umbrellas, pencils, coins, magnets and bracelets.

Souvenirs were produced in Lithuania, China and Poland, and part of revenue from their sale will be used to cover the papal visit's costs.

Vilma Drulienė, the Maxima retail chain's head of commerce, told BNS Lithuania papal souvenirs have been sold for over several weeks now and their demand grew around 20-30 percent during the last week.

Some people rushed to bookstores ahead of the visit to buy the pope's books.

"There's been an increase and we've seen the sale of the pope's books rise two or threefold," Zita Barusevičienė, head of sales at the Vaga bookstore chain, told BNS Lithuania.