Job - A Simple Man: a Danish-Jewish musical drama based on the novel by Joseph Roth in Vilnius 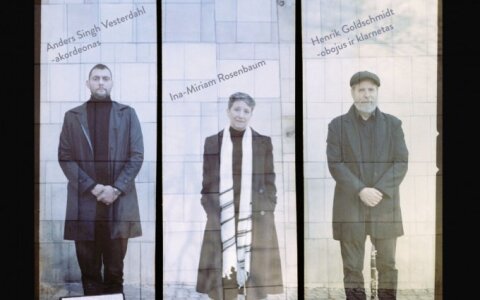 JOB – A SIMPLE MAN will be performed on September 24 at 19:00 in the VGSJM Tolerance Center (Naugarduko St. 10/2, Vilnius). Entrance is free. The play will be performed in Danish with Lithuanian and English subtitles.

JOB – A SIMPLE MAN is a powerful story of an emigrant's journey from the old world – a small village in Russia, to the new world – Manhattan, New York. It is about an ordinary Jewish man, who, like Job in the Old Testament (Hebrew Bible), experiences loss, devastation, damnation – and eventually a miracle.

The performance has a prominent Danish actor Ina-Miriam Rosenbaum in all roles. Oboist Henrik Goldschmidt and accordionist Anders Singh Vesterdahl will accompany the text with their virtuosic klezmer tunes, elevating the drama to a universal story about joy and agony of cultural and religious encounters.

In this performance, Ina-Miriam Rosenbaum demonstrates a tremendous artistic capability, earning her the most prestigious Danish theatre award Reumert in 2018 for best female lead actress.

Since the premiere in 2017, JOB – A SIMPLE MAN has been performed in theatres, churches and private homes around Denmark. The performance in Vilnius will be the first international staging of the play. Another performance will take place in Riga on September 25, and future performances in Poland, Russia and the US are being planned – following the route of many Jewish migrants in the 19th century.

The text has been dramatized by Karen-Maria Bille based on the novel JOB by Austrian-Jewish author Joseph Roth (born in 1930).

JOB – A SIMPLE MAN in Vilnius is produced by the Danish Cultural Institute and the Embassy of Denmark in Lithuania in collaboration with the Tolerance Center of the Vilna Gaon State Jewish Museum. The performance is part of Denmark's celebration of Lithuania's centenary and is supported by the Danish Arts Foundation and M. Goldschmidt Holding.