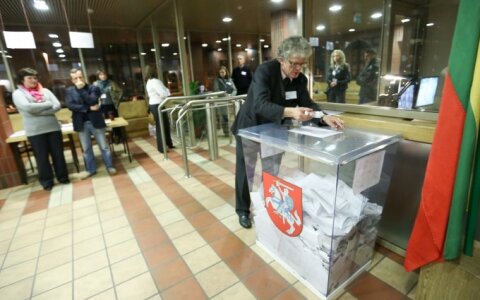 A proposal to hold a dual citizenship referendum in Lithuania on two days with a gap of two weeks might run counter to the country's Constitution and Lithuania might be held up to ridicule for holding such a vote, en expert in constitutional law says.

"It seems to me that there are doubts on whether such a proposal is in compliance with the Constitution. I have in mind the proposed votes with a two-week gap," Rimantas Sinkevičius told lawmakers on Wednesday, attending a meeting of a special panel set up to prepare for a dual citizenship referendum.

The panel is considering putting before parliament a proposal to hold a dual citizenship on May 12 and 26 when Lithuania will also hold a presidential election.

"Europe is not acquainted with such a provision as the principle of continuity applies and voting in a referendum must be continuous," Sinkevičius said.

Moreover, a referendum with a two-week gap would breach the principle that votes must be counted immediately after the vote.

Ramūnas Karbauskis, leader of the ruling Lithuanian Farmers and Greens Union, paid attention to the fact that the proposed two-week gap was aimed at improving the results as the number of voters could increase by 8 percent.

"We can expect over 60 percent of voters and then we get a theoretical possibility to have a positive result," he said.

In other cases, a citizen of the Republic of Lithuania would not be allowed to become a citizen of another country, except for exemption provided for by the Constitution.