Lithuanian scouts mark the middle of their Scouting history 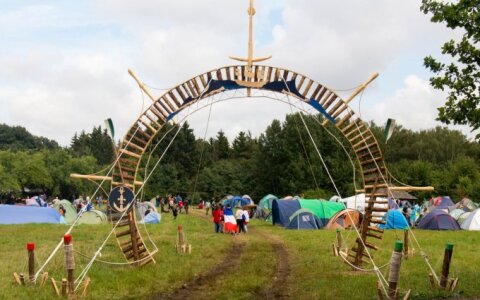 Lithuanian scouts marked the middle of their Scouting history by organizing the biggest scout event in the Baltic region. The centenary Jamboree named “Generations of Campfire” took place in Rumšiškės, one of the biggest open air museums in Europe, from 14th to 22nd of July, a press release from the Lithuanian Scouts Union states.

This is the second time in history, since the restoration of independence of Lithuania, that all Scouting organizations get together to make such a big event come true. Thus it wasn't a surprise that over 3300 participants and volunteers showed up to attend such an important moment not only to Lithuanian scouts, but to Lithuania as well. Scouts from 22 countries were present, making up a total amount of more than 500 people. Though majority of the guests came in from European countries, there was a significant number of people from outside Europe as well, including Egypt, Israel, United States of America and Australia.

It didn't come as a surprise that such event attracted a lot of attention. During the guest day more than 1500 people showed up to experience the magic of Scouting. A number of important Lithuanian politicians came for a visit, including the president of Lithuania, official camp supporter Dalia Grybauskaitė, the Speaker of the Parliament Viktoras Pranckietis, Vilnius mayor Remigijus Šimašius and Lithuanian Youth Council president Antanas Mikalauskas.

The event attracted attention of world level, as it was visited by current World Organization of Scout Movement (WOSM) European Region Committee member Veerle Haverhals - Chip and European Scout Foundation Honorary Chairman Jørgen G. Rasmussen. Both of the guests spent time talking with Lithuanian scouts and leaders, as well as held Friends Of Scouting in Europe (FOSE) reception, during which 13 Lithuanians became new members and supporters, who financially contribute to scout movement in European region.

"Friendship idea of the Jamboree program made the program managers adapt the famous Japanese Heijunka management tool as everybody in the Jamboree had the chance to receive the same activities as others. While being divided in 4 age groups (6-9, 10-13, 14-17, 18-25 y.o.) the biggest age group of 14-17 featured 550 members from 20 countries across the globe.

The 2018 has been officially announced by the Lithuanian parliament as the year of Scouting in Lithuania. The Centenary Jamboree "Generation of Campfire" marks the middle of the year, during which many events are happening. There already has been a Lithuanian Jamboree in Australia. Future events include Lithuanian Scouting Jamboree in USA, as well as a conference this autumn.

Lithuanian scouts mark the middle of their Scouting history