Italian Lithuanian A. Kriščiūnaitė-Dantoni: There is still a Soviet Union Street in Florence 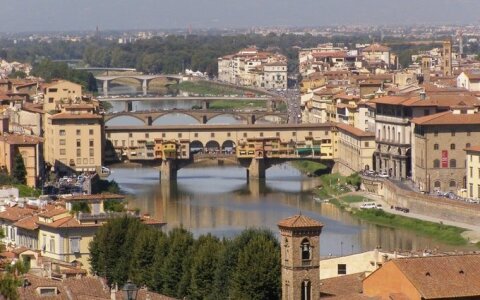 Asta Kriščiūnaitė-Dantoni , Tuscany Lithuanian community founder and chairman of the board, recently told the LRT.lt news outlet that Italians tend to believe disinformation. “They have it in their heads that we speak Russian and don’t know our country’s history,“ she said. She’s happy to be working hard to change these misconceptions, lrt.lt writes.

—The Tuscany Lithuanian community was founded by you just last year and you are their chairman of the board. What led to the founding of this community?

–It was back in the summer of 2013 when Lithuanians living in Florence and the surrounding area first got together to work on initiatives, however the ultimate boost to our membership came in the form of an important event–the dedication ceremony of 'Lithuania street' in September 2016.

We officially created the Tuscany Lithuanian community on February 21st, 2017 and now we have over 40 members. There's still plenty of room for growth because, according to the Italian statistics department, as of 2018 there are 332 Lithuanians living in Tuscany.

We wanted to create this community for a few reasons: to reach out to Tuscany Lithuanians in order to bring everyone together for important holidays, strengthen ties to Lithuania, to speak Lithuanian with each other, to promote Lithuania in the public arena, and to introduce Italians to Lithuanian culture. We want to promote cultural, social and economic exchange and also be supportive of recent arrivals and others who plan on coming to this region.

—Over a year has passed since the creation of the community, are you moving forward with any activities?

–Our community is still young, but I'm happy to report we've teamed up to get a lot done: We have participated in the Lithuanian Teacher Association's national history trivia competition. We have sang the national anthem together every year for the past two years on Statehood Day, July 6th. Last October, together with Tuscany Lithuanian artist Victorija Skafaru, we invited Lithuanians to plenerą in nature areas . We also have participated in several events for tourists and showcased Lithuania at those events.

On November 11th, we participated in the St.Martin of Florence 'Skydų' Institute's formal awards ceremony. At the event, Lithuanian basketball player Rimas Kaukėnas, who is the founder of a charitable organization that helps sick kids in Lithuania, was awarded the Bronze Sheath along with many other deserving candidates. His candidacy was suggested by the Tuscany Lithuanian community board, together with the Republic of Lithuania's honorary consular in Florence, Enrico Palasciano.

Last year, community members celebrated 'Kučias' together. The Kučias table wasn't that much different from an authentic Lithuanian one. We had 'Kūčiukiai', poppy milk and even communion wafers flown in from the Vilnius cathedral.

We've got a great group here and have had quite a few meetings and events. We are happy and proud of the fact that we have created such a fine community, there's a lot of energy and enthusiasm here! We are also very glad to report that soon we will be starting an informal Saturday school here for our children. —Do the Tuscany Lithuanians willingly get involved in the community-organized events and activities?

–We are putting forth a lot of effort to attract a wide variety of people with different interests and hobbies to our events. I notice a lot of new faces at every event which is fascinating. That means we're all heading in the same direction and doing a good job!

—How are you planning on commemorating Lithuania's 100-year anniversary?

–We the Tuscany Lithuanians, are preparing a very special 100-year commemoration. Between Oct 12-13th 2018, we are organizing a convention for the Lithuanian-Italian community. For this two day event, we've invited speakers from Pisa, Florence, Vilnius University, and Lithuania's foreign affairs ministry. The tourism department and representatives from tourism companies will also be in attendance.

On day one of the convention we will talk about historical ties between Lithuania and Italy, we will promote current social, economic and cultural ties. On day two, we will discuss Lithuanian identity, specifically how Lithuanians living outside of Lithuania can contribute to the developement of modern Lithuania. I hope it will be an interesting and useful event for everyone involved.

It's fairly common to find Italians who still view Lithuania as part of Russia, how in your opinion should Italian-Lithuanians contribute to changing this misconception?

Unfortunately, a good number of Italians seem to be susceptible to misinformation and quite a bit of false information is disseminated during information wars(on social media). Usually many of the older generation of Italians mistakenly believe that Lithuania is a part of Russia. They mistakenly think that we speak Russian, and they are not familiar with the true history of our country. That's why I'm always mentioning to them that we are "Northern Europeans". Most younger Italians know better than to believe misinformation and that's a good thing.

It boggles the mind that there's still a street named after the Soviet Union in Florence, however a few years back they also named a street after Lithuania. It is symbolic that they took a part of Soviet Union street and renamed it "Lithuania", very symbolic indeed. The process of changing the name took a couple of years and most of the credit for the switch goes to Lithuania's honorary consular in Florence, E. Palasciano.

I am always trying to remind non-Lithuanians that we are who we are as a people because of our shared (tragic) history. When we organize an event and Italians come to it, we have conversations with them about that history. One of these get-togethers was the January 13th commemoration, at the first Catholic mass in Florence in the Lithuanian language. It was an occasion to talk to Italians about the events in 1991 and Russia's role, both then and now.

—Does it ever get tiring after so many years to answer the same questions over and over from Italians about Lithuania ?

–Of course sometimes it grows tiresome. On the other hand, when I meet a person who is truly interested in Lithuania, it gives me a boost of energy and I feel a renewed vigor. I relate to them all kinds of stuff about Lithuania. I'm also very glad that when Italians arrive in Lithuania these days, they find a modern country and a very cosmopolitan city in Vilnius.

—Why did you choose such an unusual destination for Lithuanian emigrants in Italy?

—Are you adapted to the southern (European) life style ?

–No, I don't think so. I don't really feel "Italinianized". Actually I sometimes feel the opposite and end up mentioning my Lithuanian roots to people. Maybe the one (Italian)cultural trait I've adapted to is talking louder and more freely, but I haven't noticed any major differences because I'm really not that disconnected from Lithuania.

One small example of a cultural difference here is the climate affecting dinnertime. We tend to eat the evening meal later here than in Lithuania (due to the hot weather). I am still preparing Lithuanian dishes though because my husband likes Lithuanian food. He also comes to Lithuanian community events, is learning the Lithuanian language, and even listens to songs by Andrius Mamontovas .

By the way, we got married in Nida, Lithuania and our wedding rings were specially made out of amber and silver by the artist Arvydas Markevičius.

—Upon returning to Lithuania do you feel any animosity from Lithuanians living in country ? –There are all types of people. In my neighborhood, I don't feel any animosity towards me personally, but I'm aware that in the general Lithuanian public there are quite a few negative opinions(of emigrants). However, it's great to see that the Republic of Lithuania's foreign affairs ministry(URM), is actively working on addressing this along with initiatives like 'Global Lithuania'.

On July 1st, a couple of events took place "A hundred faces of Lithuania" and "Let's join Lithuania", which invited local Lithuanians to get acquainted with their countrymen living abroad . These were excellent events, meant to reduce the feeling of exclusion emigrants often face. In town hall square, where the events took place, there was a fantastic feeling of togetherness which was much needed.

At the events, we talked about ourselves, Lithuanian schools,planned get togethers and national holidays. We tried to show that we are not exactly "emigrants". That word has a somewhat negative connotation. We are just Lithuanians living outside of Lithuania. I myself feel like a full-fledged Lithuanian citizen, there shouldn't be an "us versus them" mentality, only a united people.

—If you could, do you want to move anything from Italy to Lithuania?

–Definitely not Italian (bureaucratic) procedures, but it would be nice to transplant more sun and warmth there. I remember when I studied at Vilnius University, a professor from the Venice region used to say that she missed sunshine. At the time I felt she was little bit off base; I mean, sure it's a little overcast in Lithuania, but there's still sunshine there. However, after relocating to Italy myself, I began to understand what she meant. The Southern (European) weather is beautiful and people here seem to act freer because of it.

—Anything you would bring over from Lithuania to Italy?

–If we're talking about personal wishes, then I would like to teleport my family, friends, black bread and cold beet root soup here. On the other hand, Italy is Italy and Lithuania is Lithuania, every country has their pluses and minuses. Lithuania is my homeland, that's where my heart still is even after 11 years in Italy.

—Do you ever plan on returning to Lithuania to live ?

–Yes I do. Maybe not in the near future, but my desire to live there someday is strong. I see myself and my husband in Lithuania and he recognizes that it would be a great experience for him too. But who knows how it will be in the future.