The Centre of Excellence of Creative and Cultural Innovations in Kaunas 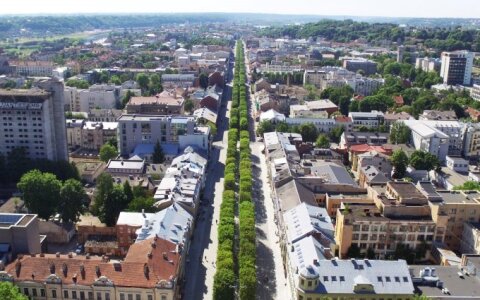 The Centre of Excellence (CoE) of Creative and Cultural Innovations is scheduled to open in Kaunas as one of the initial Centres of Excellence in the Baltic States. It will provide diverse specialized services under experimental research hubs and co-operative collaboration environments for high level research being accomplished by the European and worldwide scientists. The vision of the Centre of Excellence of Creative and Cultural Innovations will be presented in the International Forum on 11 of July, 2018, a VDU press release states.

One of the co-author of the Centre of Excellence project, assoc. prof. Jūratė Tutlytė (Vytautas Magnus University, Department of Art History and Criticism) notes, that the centre to be established intends to become an active space for sharing and spreading competence with the reference to the development and promotion of cultural and creative industries' scientific research potential and competitiveness in Lithuania, implementation of highest level scientific research, training and expertise. Besides research and innovation actions, the most significant knowledge and competence transfer phases are going to be covered: testing of activities and models, simulations, creation of experimental environment and hubs, etc.

Related articles
100 women of Lithuania that all Lithuanians worldwide are proud of!  (1)
Lithuania must rely on innovation, not EU money, to avoid middle-income trap - EU official

Participants of the event – society, representatives of cultural and creative sector – will have opportunity to get acquainted with the vision of the Centre of Excellence which has been developed in a year, as well as to contribute.

According to assoc. prof. J. Tutlytė, the Centre of Excellence will serve for multidimensional research in cultural and creative field overlapping and merging other fields and sectors, focusing on a consumer's participatory and engagement research, simulating new scenarios and future trends.

"At the same time all conditions for the development of innovations will be created – operating hybrid laboratories will be assigned for atypical research and art experiments, ideas' development, modelling and simulation. Market conditions are not favourable for novel and unaccustomed decisions to be spread out and implemented. Therefore we would like to create an environment for irrespective experiments, cultivation and multiplication of ideas, establishment and development of start-ups and spin-offs", – clarifies assoc. prof. J. Tutlytė.

The establishment of the Centre of Excellence is focused on the examples of analogical worldwide institutions which bind culture, technologies, arts, business while developing innovative products and services. According to the authors of the project, such centres become significant research and knowledge promoters, as well as policy makers. In Kaunas, the established Centre of Excellence will function as open hub involving diverse representatives – researchers and artists – of different fields, as well as cultural institutions, business representatives, consumers, communities.

Following these tendencies, the establishment of such Centre of Excellence in Lithuania is particularly significant namely due to the lack of communicative competences between cultural institutions or international context. „They often lack communicative or analytical abilities, or skills to work with audience. Cultural and creative institutions are usually small-sized, thus lacking other competences as well, namely management, administration, project implementation, funding-search mechanisms. Besides that, broader horizontal fusion with international partners is missing as institutions cooperate exclusively with each other, whereas emergence of novelty is based on atypical links between unexpected associates", – states the co-author of the project.

The new Centre of Excellence of Creative and Cultural Innovations is targeted to promote those links and contacts with diverse partners. It is planned to organize trainings oriented towards development of diverse skills and competences, provide support for creators to develop business models and communication strategies, and intermediate in partner search process.

It is planned that one subdivision of the Centre of Excellence, the Posthumanist Futurology Unit, will be dedicated for the scientific research and experiments based on arts – atypical interdisciplinary partnerships between diverse scientific fields, for instance, neurosciences, cosmology, biotechnologies and social sciences, humanities, arts, as well as future forecasting.

„We would like the Centre of Excellence to be open in all meanings – it should enable emergence of non-standard ideas: links between art, culture and technologies. Those links are the basis for explosions, so, that's what we expect to have", – explains assoc. prof. J. Tutlytė.

Assoc. prof. J. Tutlytė states that today we experience the significant cultural and technological shift which makes to rethink existing relations between an individual, new technologies, sciences, and creativity.

„In the field of culture and creativity one of the main roles is attributed to a consumer, a creator who essentially changes the direction of professional production circulation: from passive consumption to cooperation, inclusion, and sharing experience. The possibilities of technologies and innovative approaches being used are expanding: from high-tech to low-tech and no-tech decisions. Therefore, it becomes important not only to rethink the definitions of cultural industries, but also to explore realities of participatory culture and economy, and newly created values, searching for innovative research methodologies and instruments to research and measure this composite value", – the assoc. professor explains.

According to the scientist, today we operate in the context of complex values and philosophical provisions: from posthumanism which disputes human anthropocentrism trying to erase divisions between human and non-human forms of life, to transhumanism which highlights technologies in particular. Through these provisions the physical and cognitive power of an individual is expanded and extended. The contemplation and reflection of the world and ourselves in the context of wider philosophical and practical activities become especially important.

This is the first time that an institution of such kind, the Competence Centre of Social Sciences and Humanities, wins the financial support of the European Commission -- the establishment of the Centre of Excellence of Creative and Cultural Innovations is financed by the European Union Framework Programme for Research and Innovation „Horizon 2020". The project of the establishment the Centre of Excellence has been prepared by the researchers representing Vytautas Magnus University, Kaunas Technological University and Politecnico di Milano.

The Centre of Excellence of Creative and Cultural Innovations in Kaunas