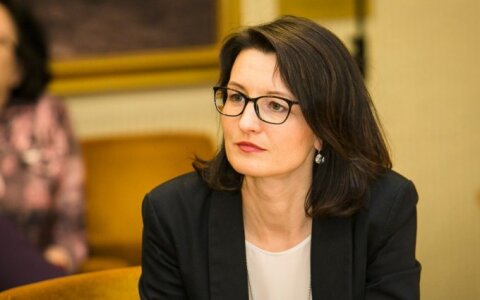 Hopes are fading for a positive dual citizenship referendum in Lithuania after President Dalia Grybauskaitė vetoed amendments to the Referendum Law, lowering the threshold for such a referendum, the head of the Lithuanian World Community says.

"It's such a pity. We had so much hope to have at least some possibility to have a positive referendum outcome. And now this hope is fading as 1.3 million votes will be needed," Dalia Henke told BNS Lithuania on Wednesday, commenting on the presidential veto.

"The decision will not be made with the votes of those living abroad as only 300,000 Lithuanian living abroad have the right to vote, but it will be made in Lithuania as 1.3 million votes will be needed. (…) So it’s in Lithuania where we need to step up all effort and launch a public campaign on the importance of preserving citizenship, and to stress that we are a wide, big nation with diasporas across the world and that every citizen counts," Henke said.

The Lithuanian president earlier vetoed the amendments the Referendum Law as potentially running counter to the country's Constitution.

The president underlined that she's in favor of granting dual citizenship to a larger number of people but invited Lithuanians across the world to get together for legalizing such a possibility in a way that does not raise constitutional doubts.

In late June, the Seimas of Lithuania adopted the amendments to Article 7 of the Referendum Law, thus lowering the threshold for the referendum on amending Article 12 of the Constitution, which is connected to citizenship.

The president believes the parliament's proposal to specifically lower the threshold for a citizenship referendum from 1.25 million to 840,000 votes raises constitutional doubts and thus is very risky.

The results of a referendum held based on the amended law are likely to be later quashed in court and deemed void and null. In that case the expansion of dual citizenship would be postponed indefinitely, the presidential office said in a statement.

The adopted amendments have been criticized by parliamentary lawyers and some lawmakers who say they will create a dangerous precedent and facilitate changes to other constitutional articles.

As a precaution, the Seimas plans to turn to the Constitutional Court in the fall regarding the constitutionality of the adopted amendments.

Lithuanians living all over the world had asked to adopt the amendments on the legalization of dual citizenship, fearing that, otherwise, a referendum on dual citizenship would fail.

Under a plan, such a referendum could be held alongside presidential elections next year.

The Constitutional Court has ruled that dual citizenship cannot be a common phenomenon and granting it to people who left Lithuania after it restored independence would run counter to the Constitution.