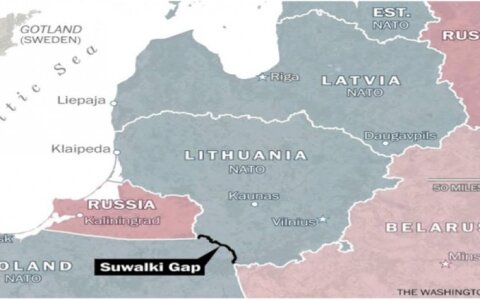 Lithuania's Chief of Defense Lieutenant General Jonas Vytautas Žukas is meeting with Poland's military commanders in Warsaw on Thursday to discuss the region's air defense and the defense of the so-called "Suwalki gap".

The meeting will also address multinational operations, the NATO and US contribution to regional security and the countries' readiness for collective defense, as well as the development of the trilateral Lithuanian, Polish and Ukrainian Brigade and assistance to Ukraine, the Lithuanian Armed Forces said.

Poland has this year decided to buy Patriot long-range air defense systems from the United States.

The Suwalki gap is a land strip of around 100 kilometers on the Lithuanian-Polish border that is wedged between the Russian exclave of Kaliningrad on the west and Belarus on the east.

In a military conflict, the seizure of the land corridor would cut off the land route for NATO allies to the Baltic countries. Defense officials, therefore, often discuss the defense of the land strip at their meetings.