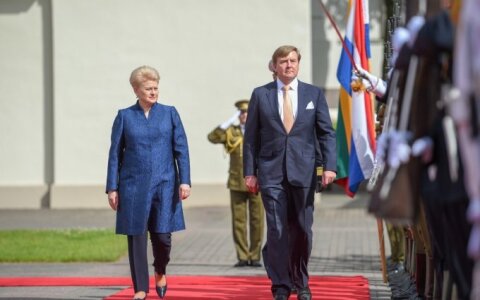 On June 15 His Majesty King of the Netherlands Willem-Alexander while conducting a state visit in Lithuania will meet with Dutch soldiers serving in the NATO enhanced Forward Presence Battalion Battle Group in Rukla. His Majesty will be escorted by President of the Republic of Lithuania HE Dalia Grybauskaitė, Minister of National Defence Raimundas Karoblis and Chief of Defence of Lithuania Lt Gen Jonas Vytautas Žukas during the visit to the Lithuanian Armed Forces Lithuanian Great Hetman Jonušas Radvila Training Regiment in Rukla, the Ministry of Defence of Lithuania announced.

The Netherlands’ soldiers have been deployed with the NATO enhanced Forward Presence Battalion Battle Group since the very beginning when the eFP Battle Groups were deployed in the Baltics and Poland by joint decision of all NATO allies for deterrence and defence. Dutch troops joined the German-led Battle Group in early 2017 with equipment and weaponry and have rotated several times since. The Netherlands supports this mission by sending 250 soldiers. The company is part of 44 Mechanized Infantry Battalion of 43 Mechanized Brigade.

The Dutch contingent has brought heavy material. They have CV90s, Boxers, Fenneks and YPRs. With these armoured vehicles, the unit is able to operate in any type of terrain and support the eFP battlegroup in Lithuania with assets that are not delivered by the other contributing nations, allowing the battlegroup a wider scope of operation abilities. The Netherlands delivers a permanent contribution to the enhanced Forward Presence.

The Dutch personnel in the NATO eFP are not the only the Netherlands’ nationals in Lithuania: two Dutch servicemembers are also serving with the NATO Force Integration Unit in Vilnius.