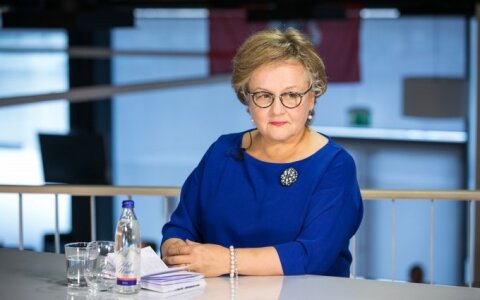 Russian information weapons and the creation of an 'alternative reality"

Nowadays Russian propaganda and disinformation reaches unprecedented levels. After the military aggression against Ukraine in 2014, i. e. annexation of Crimea and military aggression in Eastern Ukraine, it became necessary for the Kremlin to justify its illegal actions by all means available. The latest lessons learned are from the Brexit referendum and the elections in the Netherlands, France and Germany, where the Kremlin's footprints were quite visible. The EU and its Member States are facing organised and heavily funded brutally aggressive Russian state fake news campaign, which, by using manipulation and disinformation tactics, conspiracy theories and proliferate falsehoods seeks to destabilise Western democratic order, confront and weaken states in order to break up the EU unity and to get support for those who want to destroy it.

While many of the EU Member States only recently started to wake up to the threat of the Kremlin information war, the Baltic States have been fighting the Russian propaganda and disinformation since 1990s on a daily basis. One of the latest examples – in March 2018, Russian trolls announced that the Minister of National Defence of Lithuania Raimundas Karoblis recognised the Russian annexation of Crimea. The Ministry of National Defence of the Republic of Lithuania immediately disproved this fake message.

Russian state propaganda and misinformation campaigns are not a new phenomenon. However, nowadays the propaganda machine is using all contemporary technologies at its full advantage: internet, social media, 'troll farms', bots. It allows spreading fake news to hundreds of thousands of recipients within a short timeframe and little efforts. Through the years, the form of warfare has changed in which the physical damage of the enemy on the battlefield has switched to a less lethal digital level - the war against the enemy's information systems. Growing confusion and mistrust leads Western societies to the indifference and disbelief of their own values and political class. The main difference between the Soviet and Russian propagandas is that during the USSR period, it was important to prove that the information is "trustworthy", however now the truth is not important, anyone can say anything. What can be more efficient for the Kremlin, which is seeking to create an "alternative reality"?

The Kremlin invests more than a billion euros a year for its propaganda machine, which includes television RT, with a presence in 100 countries, and Sputnik, which publishes stories in 33 languages. On top of that, the famous Kremlin 'troll farms', which spread fake news using the newest technologies, are also heavily financed from the state budget.

Is the EU response sufficient? European elves vs. Kremlin trolls

The EU's answer to massive direct disinformation attacks from Russia is irresponsible and very weak. For several years, the EU has been looking at this information war as it was not directly affecting its societies and refused to admit that there are active attempts to destroy the world order which provides the Euroatlantic region with prosperity and peace for more than 60 years. However, Eastern, Central and Northern EU Member States were the first to understand the threat to Europe and the world order of the well-organised Kremlin propaganda and disinformation campaign and pushed the EU to put strong united efforts into the fight against it. It was and still is not an easy task for the EU to perceive the Russian information war as a real threat. Some EU Member States were late to react, some for some reason have not yet started.

The establishment of the EU East Stratcom Task Force in 2015 was an important, however, weak step the EU took to confront the Kremlin's propaganda machine. In 2015 East Stratcom had only one officer working to fight the Russian information war, now there are 14 persons doing this job. The team is composed of 7 seconded national experts from Czech Republic, Denmark, Finland, Lithuania, Latvia, Sweden, UK, and the European Commission, while other members of the team are temporary agents. However, the contracts of some experts will run out in the summer of this year and most probably they will not be replaced. Obviously the absurdly understaffed East Stratcom is not in any position to fight the Kremlin's attempts to divide and destroy our societies. To compare, the 'troll-factory' in St Petersburg has hundreds of employees who spread false messages on international social media 24/7.

Since the establishment, the East Stratcom Task Force has been working without a special budget. However, the European Parliament in 2017 allocated 1.1 million EUR for the East Stratcom Task Force in the EU budget for the period of 2018-2020. For the first time since the establishment in 2015, it will have financial support from the EU budget, rather than relying on contributions from EU Member States or squeezing other budget lines. It is already a positive move, however, East Stratcom has not seen the money yet.

It is also worrying that East Stratcom division EUvsDisinfo, established to analyse and report on disinformation trends, to explain and correct concrete disinformation narratives and to raise awareness of the disinformation phenomenon, often faces censorship, which prohibits the team to fully engage into the disclosure of disinformation and propaganda from Russia. Every Thursday, the EUvsDisinfo team publishes the Disinformation Newsletter, which brings up the latest cases of news articles carrying key examples of how pro-Kremlin disinformation finds its way into international media, as well as news and analysis on the topic. However, the Newsletter does not always reaches its readers as the 'boss', the EEAS, does not always want to publish cases which might be sensitive for some EU Member States. This policy might be leading to the abolishment of the Newsletter and the EUvsDisinfo division as such. If this happens, East Stratcom would become a conformist structure with a task of spreading positive information about the EU only.

In 2019, even before or after the new European Commission will start working, East Stratcom Task Force might disappear at all. It would be a strategic mistake for the EU and would mean that the Kremlin won the information war and that its propaganda machine is perfectly effective.

East Stratcom Task Force: what is next?

Obviously, the EU reaction and response to the Russian propaganda and disinformation campaign needs to be reformed and strengthened. It is important to substantially increase EU funding and human resources for the East Stratcom Task Force if we want to protect our societies from destabilisation and destruction of our democratic order. EU citizens should know how and by whom their lives and opinions are manipulated.

A strong East Stratcom structure could even be seen as a separate agency working to fight disinformation campaigns against the EU and its Member States, identify and prevent cyber-attacks and other forms of future cyber wars. Moreover, it is important to identify the most suitable place for the East Stratcom in the system of the EU institutions. The Task Force is dealing with the fight against disinformation inside the EU, therefore, its place in the EEAS does not seem coherent. East Stratcom tasks are related to the internal EU affairs and therefore its place within the European Commission's Directorate General for Migration and Home Affairs (DG HOME) should be discussed as another possible option. It is important to discuss this issue as soon as possible in order for the EU to respond to information wars with full strength and readiness. The upcoming EU Council meeting on 25 June 2018 is a possibility to start serious talks at the highest level on the future of the East Stratcom Task Force.

The EU and all its Member States must acknowledge that the Russian disinformation threat is serious. All together we shall put strong efforts in strengthening the resilience of our societies to fake news. We understand that stopping all disinformation at all times is 'mission impossible'. What is possible is that by being stronger and more united, we can win this war for the future of our young generations. The battle for the truth is still going on.

Dr. Laima Andrikienė is a Member of the European Parliament since 2004 and Member of its Security and Defence Subcommittee.