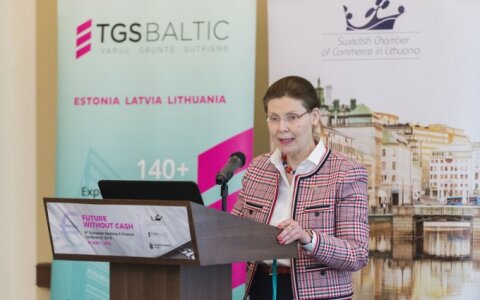 A future without cash was the subject of the Swedish-Lithuania Business Forum on Thursday in Vilnius. How to achieve that cashless society, the merits and some of the challenges was the main subject of presentations and panel discussions. Sweden gives us a closer look as to how the cashless future is shaping up.

More than 100 attendants in Vilnius' Kempinski Hotel got an insight into various digital facilitators whilst acknowledging that it will be a while before cash will completely disappear. Governments and various financial institutions obviously see the benefits, whilst cultural and behavioural factors form the main barriers to eliminate cash.

Ambassador of Sweden to Lithuania, H.E. Maria Christina Lundqvist, during her opening remarks said, 'Sweden is racing towards becoming the world's first completely cashless society." She said, "80% of all transactions are made by cards". She smiled as she stated, "Increasingly we see signs with 'Cash Payment Only'."

The Chair of the Swedish Chamber of Commerce in Lithuania, Andrius Francas said, "Sweden is a good example of how society can move forward into a cashless society." He praised the efforts of the Bank of Lithuania for having taken many steps to facilitate that objective. He added, "As this is the sixth Swedish Business Forum, we see that Lithuania has made a lot of progress in becoming cashless in just a few years."

Vilius Bernatonis, Partner, Head of Banking and Finance Practice Group at TGS Baltic, was the skilful moderator introducing and challenging the various specialists offering ways to get the coins and bills out of our pocket and transforming the world into a completely cashless environment. Martynas Vilkis of the Ministry of Finance offered many of the incentives that governments have to facilitate to reduce the use of cash, including tax evasion, preventing money laundering and facilitating e-commerce.

Mantas Zalatorius, president of the association of Lithuanian Banks offered a short history of cash. He believes that cash will be with us for a while as people consider it 'safe'. Electronic payment systems are transparent, traceable, and infrastructure dependable and rely on trust. Providing analytical tools and overviews may facilitate adaptation of cashless payment modes. Jekaterina Govina, Advisor to the Board Members of the Bank of Lithuania thinks that all of that may be achieved if the government acts as a "guide dog instead of a guard dog".

Stanley Skoglund a payments expert at Minerva Partnership gave some insights into the drivers of a changing payment industry in Europe and elsewhere in the world, examining business models that drive innovation in forms of payments. At present, large card firms such as MasterCard and Visa still dominate the market.

Mart Maasik, Innovation Lab director at the SEB Group Sweden, explored how banks can play a role in developing and adapting forms of FinTech. In addition to the skill set needed, intrapreneurship was seen as facilitator to changing the mindset of financial institutions. Johan Modenius, the head of MasterCard in the Baltics also saw FinTech as an enabler to achieve a digital future, devoid of cash payments.

John Basquill, the editor of PaymentsCompliance demystified the new European directives in dealing with various electronic payment forms. Anti-terrorism and money laundering have put Prepaid money cards on the radar screen of the European commission. Serious action will be taken when there is lack of due diligence, whilst capping the size of payments made with those prepaid cards. The EU is also paying attention to the entire virtual currency environment.

Various speakers explored new payment methods using Blockchain and other systems. Marek Partel provided the Estonian view on innovation in the real estate finance sector and Sille Rastas, an Estonian associate at TGS Baltic addressed regulations and how Estonia is attempting to provide a legal framework to crypto currency offerings. Justinas Pikilis, back from an overnight trip to New York, drew some parallels between the dot com bubble and the present crypto currency hype.